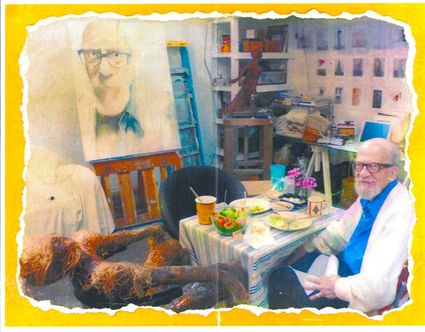 Olaf Pooley is a very special man. He turns 100 years old on March 13. This man has seen many changes throughout the years he's been alive. Having lived through both World War I and World War 2 and countless other wars, this man has seen it all.

He was born in Parkstone, Dorset, England on March 13, 1914. His father was English and his mother was Danish. Olaf was a student of architecture at the Architectural Association, London, and of painting at the Chelsea School of Art. In Paris, he studied under the tutelage of Marcel Grommaire, at the Acedemie Colorossi. He has exhibited in Europe, including with the London Group and the Bloomsbury Gallery, London; in Paris at the Gallerie d'Alsace, the Centre Culturel Saint Severin, and L'Imagerie – and in Mallorca, at La Residencia and the Galleria Ortez, Palma de Mallorca.

Alongside his work as a painter, he has been a working actor since his days in England. His first full time employment was in the Design Department at Pinewood Film Studios in England. He subsequently worked in Theatre Décor. He was a member of the BBC Radio Drama Reparatory Company. He went onto working successfully as an actor in London's West End Theatre and the various alternative media.

Upon immigrating to the United States in 1986, Olaf continued his acting career while his second wife, Gabrielle Beaumont, pursued a very successful TV Director career. He had a reoccurring role as Professor Stahlman in the Doctor Who television series. He is one of only 25 actors to have speaking roles in both the "Star Trek" and the "Doctor Who" franchises. He still receives mail from fans around the world who follow the Dr. Who series and admire his work. He has written numerous screen plays and was a close friend of Sir Alec Guinness for many years.

Quoting from Olaf "It seems to me that the art of painting must be one of the most difficult forms of art there is – though I hasten to add they are all difficult. How many truly great works are produced in this medium per century, let alone per annum – particularly considering the miles of canvas that receives its quota of expensive pigment each year? It has to be admittedly, mighty few. I have personally witnessed an artist whose early etchings rank with those of Rembrandt, and who was in his day one of the most sought after English portrait painter, banging his head with his fist and moaning over and over again "my work is not good enough, my work is not good enough! And indeed stories of artists similarly expressing this sort of despair are innumerable. I have personally acted out that scene, but perhaps the knowledge that one's work is not good enough is the very thing that keeps one on a tether to one's easel for six hours or so a day! It is a privilege to be an artist and I am fortunate in this respect".

Olaf reads a book a week and his home is full of thousands of books. He goes on a walk daily, does his routine calisthenics and eats a healthy diet. Sure, he has his aches and pains, as we all do, but he plows through it. Olaf keeps going no matter what. He is fortunate to have passion in his life for painting. So when you feel like the weight of the world is on your shoulders, and you just want to give up, remember Olaf Pooley. He never gives up. He is a vibrant, contributing member of society who enjoys life. He is an inspiration to us all to live each day to the fullest. Every day is a gift.

Olaf Pooley's current studio location is at the Santa Monica Art Studios located at 3026 Airport Drive, Santa Monica, CA 90405. He is exhibiting his paintings at the "open house" event on March 15th at 12:00pm – 6:00pm. For more information about his paintings, please go to: inharmonyyoga.com.

Update: Olaf Pooley passed away peacefully on August 8, 2015. Olaf made it to 101 years old! He had a sharp mind all the way until the end. Unfortunately, his body gave out. He passed away in his sleep. I am so grateful to have known this amazing man. He was such a big part of my life. His memory lives on with me and all of his many friends and family that loved him dearly. -- Jackie Kaminski

http://missingepisodes.proboards.com/thread/9829/happy-100th-birthday-olaf-pooley Some birthday wishes for mr pooley from his dr who fans. congratulations

Actress Zohra Segal who played Ping-Cho's assistant in Marco Polo is 102 in a few weeks. Happy Birthday to Mr Pooley though.

Olaf has a admiring fan base owing to his work in the 1970 Doctor Who Story 'Inferno'. That he has made it to 100 years is amazing. I was in Santa Monica a couple of years ago (I am from the UK), and had I known he was painting there I would have bought one! Well done to him, and many more birthdays to come I hope. Curious Fact: Olaf Pooley was Born in Poole, so his surname is also his nickname! Another Strange Fact: Only Actor to have appeared in Dr Who to make it to his Century.