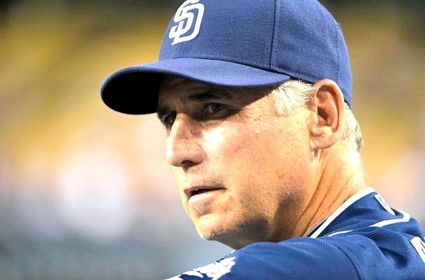 The Padres were on the verge of beating the Dodgers Sunday in San Diego.

With the winning run on base in a 2-2 tie in the ninth inning Juston Upton hit a drive to deep centerfield. Within seconds the game would be over.

Instead, Dodger rookie Joc Pederson raced back, somehow caught up with the ball and caught it.

"The catch of the year in major league baseball,' the announcer said.

If Pederson hadn't made that catch Bud Black would probably still be the Padres' manager today. Instead, he was fired Monday.

Black was in his ninth season as the Padres' manager but was in the final year of his contract. Preller admitted that he was wondering if Black should be the Padres' manager next season. Then he decided to make the change now with so much of this season remaining.

The Padres had a 32-33 record before losing to Oakland, 9-1 in Dave Roberts' first game as interim manager Monday night. That's disappointing considering that they went on a spending spree prior to the season, bringing in some high caliber talent.

The Padres finished 18 games behind the Dodgers last season. They were only six games behind after losing Black's final game Sunday.

But some of the new talent hasn't done well. Absorbing much of the blame is Matt Kemp, who was obtained from the Dodgers where he had a sensational second half of last season. This season he has hit only two home runs.

There's a long way to go in this season and we may yet have a close race among the champion Giants, the Dodgers and the Padres.

But how often in sports have we seen management replace the manager or head coach if the record isn't good.

Management rarely blames itself. Perhaps Preller's acquisitions weren't as good as he expected. That's a possibility.

Newly acquired veteran pitcher James Shields has a 7-=0 record. Upton and catcher Derek Norris have been exceptionsl. But Will Meyers has been injured and Will Middlebrooks has been less than advertised.

The Padres now have baseball's best closer in Craig Kimbrell yet they're only a .500 club.

Maybe there's a reason why Preller and the Padres have acted so harshly right now. For so many years they didn't pour enough dollars ino the roster budget

This season they spent in astonishing fashion. Maybe success takes awhile. Maybe they'll be much better next season.

Bud Black, a former major league pitcher and the Angels' pitching coach, is a good man who'll undoubtably get another job in baseball.

But he was in the wrong place at the wrong time this season.

By contrast, the Dodgers have led the division through the season's first two months despite absorbing some major injuries.

Sources tell me the Padres were going to fire Black a week earlier after they lost two straight games to the Braves in Atlanta. But when the Padres defeated the Braves the next day Black earned a reprieve.