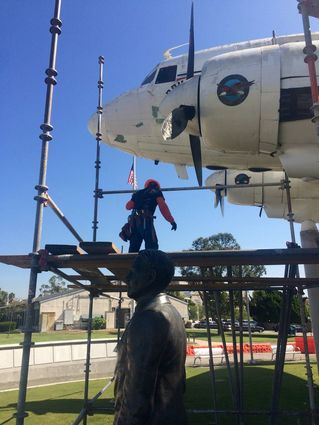 Rudolpho and other members of his crew put a fresh coat of white paint, on the DC-3 permanently displayed in front of the Santa Monica Museum of Flight. The museum commemorates the hundreds of men and women who built aircraft at Cloverfield from 1930 to 1970.

War of the Letters:

It has been an open secret at City Hall for several months that City Attorney Marsha Moutrie is being forced into resignation, in part because she epitomizes the preference for special interests shown by our City Council, and in part for her utter contempt for residents who might object.

And it is well known that our last City Manager Rod Gould gave a very lucrative contract (or two) to the same consulting firm that he later joined after he resigned (at a very high salary). The legal complaint against him was settled by his resigning from this new employment.

And it is well known that Councilperson Pam O'Connor may well have violated law, but that City Attorney Moutrie sat on a complaint against Councilperson O'Connor until the statute of limitations past.

Now, we face what may be a similar situation with City Attorney Marsha Moutrie. She is arguing vehemently that Atlantic Aviation must get a lease renewal, after the City Manager stopped giving any such lease renewals to any aviation tenants by November 2015. She argues so strongly for Atlantic Aviation because of what?? Would it be the kind of financial interests that caused City Manager Rod Gould to give out a lucrative contract to his later employer?? Is the City Attorney hoping that Atlantic Aviation will hire her after she resigns, or is she even now a consultant for their out-of-state operations ?? (Atlantic Aviation is part of a multi-billion corporation with over a dozen jet aviation facilities around the country).

I certainly don't know the answers to these questions, but they should be investigated. Why is this City Council listening to her, when Atlantic Aviation has no leasehold rights; when the Atlantic Aviation lease that expired in 2015 explicitly required Atlantic to leave on July 1, 2015, and to conduct millions of dollars of environmental remediation that has not been done. Why would Atlantic Aviation's threats to sue the City have any weight, except when they are delivered and endorsed by our "trusted" City Attorney??

Like most activists who deal with staff, we are sick to death of the sleazy, edge-of-the-law catering to special interests at City Hall. City Attorney Marsha Moutrie has epitomized the contempt with which residents are treated, and the catering to special interests that has ruined much of the charm of this beach town with oversized development projects and their traffic.

The City Attorney should resign now, not at the time of her choosing. She should get out of the way of Airport matters and the Atlantic Aviation lease renewal request. And no new lease should be signed allowing Atlantic Aviation to continue jet operations that spew cancer-causing ultrafine particulates over our homes, our schools and our city. It will be the City Council's fault if Atlantic Aviation received a lease renewal for which no legal rationale can be argued, other than "they will sue us". Let them sue, because they will lose. Take a small risk standing up to special interests, on behalf of resident and their health.

I am responding to your e-mail only because you might equate silence with assent.

The basic information that you broadcast is untrue. I have not been pressured by anyone to resign. Indeed, no one in City government even suggested to me that I should.

Let me, again, assure you that the members of this office understand our role. We provide legal advice and representation. We do not set Airport policy, including leasing policy. We do follow Council's direction on all matters, including matters related to the Airport.

With all due respect for your 20+ years of service to the City, you perpetuated a legal hoax to support the Atlantic Aviation lease and other attempts to get 3-year leaseholds prior to the July 2015 expiration date.

And with all due respect for your privacy, it has come to me through nearly half a dozen sources that you are leaving the City.

Most activists, myself included, find it highly inappropriate that you would try to hold airport issues captive to your fleeting grasp, as if a poor performance with these issues since 1998 somehow makes them your personal property.

Someone with acumen would have left by now.

MARSHA: Let me, again, assure you that the members of this office understand our role. We provide legal advice and representation. We do not set Airport policy, including leasing policy. We do follow Council's direction on all matters, including matters related to the Airport.

In March 2014, the City Council UNANIMOUSLY directed you to implement a leasing policy based upon the LMSD zoning which eliminated aviation uses (March 2014 minutes Page 5 Para 4).

In March 2015, your office recommended 3 year leases for Atlantic and Gunnell which were prohibited uses under LMSD zoning.

Your office failed to both implement an LMSD leasing policy as directed and made a subsequent recommendation contrary to March 2014 unanimous CC direction on LMSD.

In August 2014, we watched you in a public meeting manipulate the City Council by first avoiding Council Member Winterer's question on whether rental rates could be raised on month-to-month leases and then sit silently by as Rod Gould and Martin Pastucha lied in their responses. (Transcript 8/12/14).

As legal counsel to the City Council, it was your fiduciary responsibility to PUBLICLY ANNOUCNED that Rod Gould's and Martin Pastucha's responses were incorrect. But instead you deceptively allowed the CC and public into believing there was an economic reason to approve 3-year leases for aviation tenants.

I believe that constitutes "attempting to set airport policy" contrary to your claims above.

Once again, your words are inconsistent with your actions. Your behavior on the airport has been unconscionable. I take no pleasure in calling you out but this is a very serious matter.

Council Members, the City's federal obligations and the aviation leases have all expired. Please immediately give all of the aviation tenants, including Atlantic, a 30-day notice and tell them to leave.