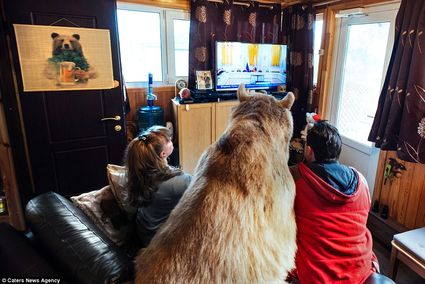 Svetlana and Yuriy Panteleenko adopted the bear named Stepan when he was aged just three months. Today the big mammal is 23 years old, weighs a whopping 300lb and stands at a height of more than 7ft.

Update, 6/29, 5 pm PDT: Authorities report that they have killed the 120 pound bear involved in this attack. It's unknown whether or not the iPad was retrieved.

Rangers hunted the hills above Altadena for a black bear who would not be Rickrolled one more time. He pushed through a tent wall, slashed a man across the forehead and stole his iPad. Stealing an iPad is a death penalty offense when it comes to black bears, authorities said.

The small bear pushed through a tent wall and appeared to be attempting to open the tent. The man had been watching Youtube videos on his iPad at about 2 a.m. Saturday when his tent fell down on him.

"He was okay with me until I started playing that dumb Russian Bear Living with Family video a third time. The first two times, he just watched it, like he was fascinated by it. But the third time, he swiped me with his claws. WTF!"

The Milliard Campground has been closed indefinitely, said Los Angeles Sheriff's Dept -- Altadena station. The camper needed about 18 sutures to sew up the cut on his forehead, deputies said, adding a cautionary note: "Nobody wants to be Rickrolled. When you Rickroll a black bear, well, watch out. Especially when you do it on his turf."

Two other campers saw an approximately 120-pound bear running away from the area. The man did not know he was injured until he felt blood dripping on his face, deputies said.

"There’s been bears every year,” William Muerer, a resident near the park says “We’ve had mountain lion and dears, and occasionally bears.” They’re not labeling this an attack since the bear never actually saw the camper.

Bear attacks on humans are relatively rare, but frequent enough to be of concern for those who are in bear habitats. Bear attacks can be fatal and often hikers, hunters, fisherman, and others in bear country take precautions against bear attacks.

Likewise, Stephen Herrero, a Canadian biologist, reports that during the 1990s bears killed around three people a year in the U.S. and Canada, as compared to the 15 people killed every year by dogs.

Multiple reports remark that one is more likely to be struck by lightning than to be attacked by a bear when outdoors; around 90 people are killed by lightning each year. However, with the increase in habitat destruction, interactions between bears and humans have increased and one would expect bear attacks to likewise be on the rise.

Unlike grizzly bears, which became a subject of fearsome legend among the European settlers of North America, black bears were rarely considered overly dangerous, even though they lived in areas where the pioneers had settled. Black bears rarely attack when confronted by humans, and usually limit themselves to making mock charges, emitting blowing noises and swatting the ground with their forepaws. However, according to Stephen Herrero in his Bear Attacks: Their Causes and Avoidance, 23 people were killed by black bears from 1900 to 1980.

The number of black bear attacks on humans is higher than those of brown bears, though this is largely because the black species outnumbers the brown rather than their being more aggressive. 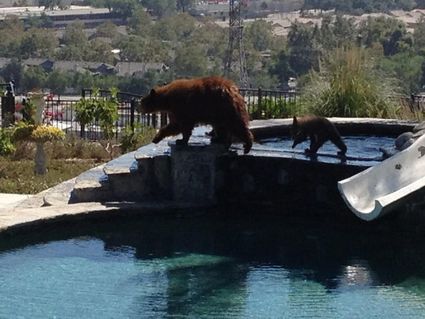 The number of black bear attacks on humans is higher than those of brown bears, though this is largely because the black species outnumbers the brown rather than their being more aggressive

Compared to brown bear attacks, violent encounters with black bears rarely lead to serious injury. However, the majority of black bear attacks tend to be motivated by hunger rather than territoriality, and thus victims have a higher probability of surviving by fighting back rather than submitting. Unlike grizzlies, female black bears do not display the same level of protectiveness to their cubs, and will seldom attack humans in their vicinity.

The worst recorded fatality incident occurred in May 1978, in which a black bear killed three teenagers fishing in Algonquin Park in Canada. The majority of attacks happened in national parks, usually near campgrounds, where the bears had become habituated to human contact and food. 1028 incidences of black bears acting aggressively toward people, 107 of which resulted in injury, were recorded from 1964 to 1976 in the Great Smoky Mountains National Park, and occurred mainly in tourist hotspots, where people regularly fed the bears handouts.