Civil War on the Convention Floor Makes Must See TV

Delegates from Texas and Colorado walk out as their attempt to force a roll call vote is defeated. 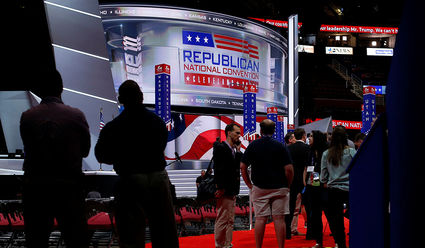 Donald Trump will introduce his wife tonight Breaking with tradition

Anti-Trump delegates from Texas and Colorado openly revolted on the floor of the Republican national convention in Cleveland, to the delight of the national media. Breaking with tradition, Trump himself will appear at the convention to introduce his wife, Melania

Some camps of delegates wanted an open roll call vote on the rules. They weren't able to get that rollcall vote, primarily because the Trump campaign and the Republican national committee, did not want to open it up to a rollcall.

The Washington Post, perhaps America's most openly anti-trump major newspaper, loaded that what the Republican Party had tried hard to prevent at the convention, had just happened.

Given 20 Colorado delegates walked out of the convention. What does this mean at the end of the day? Erin Burnett asked on CNN. The answer is nothing. But the fact that this is how it began, is not how Reince Priebus, or the Trump campaign wanted this to start.

Ben Ginsberg has long been a lawyer for the Republican national committee. Interviewed on MSNBC, Ginsberg said: " The convention faces three potentially embarrassing problems even after the walk out."

"First," said Ginsberg, "Nine or 10 states did submit petitions for a rollcall vote, essentially defining those states as anti-trump. There are 300 or 400 Donald Trump delegates who are pledge to vote for him but personally do not support him. There was a danger that those delegates might have voted for someone else which is why the Trump people and the Republican national convention itself, opposed a roll call vote 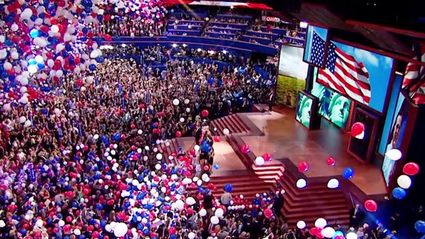 Not all Republicans are sanguine with this years nominee

It is an open parliamentary question whether delegates can abstain. Donald Trump needs 1237 delegates and if some abstain theoretically he could be denied the nomination.

"Second" continued Ginsberg "a delegate from the state can ask for his particular state to be polled. That could be embarrassing said one analyst if those delegates are not personally willing to support Trump.

Stephen King tweeted: "The deal at the Republican convention appears to be this: Glass bottles prohibited; guns are OK. Welcome to the asylum."