In a rare speech, 58 of Mrs. Donald Trump's words borrowed from Mrs. Obama 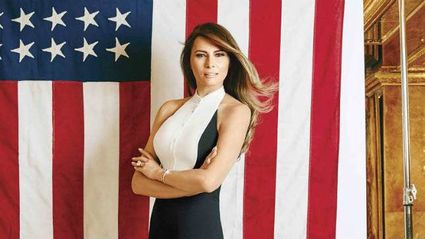 Donald Trump introduced his wife, model Melania Trump to the Convention floor tonight. The potential future First Lady has rarely spoken publicly, so she is a bit of a mystery to the American public. Shrouded in dramatic fog, the Republican Presidential candidate took the stage to "we are the champions" by Queen. He promised a big win in November and then presented "the next first lady of the United States, my wife Melania Trump."

In an accent that sounded a little like Zha Zha Gabor, she thanked the crowd for being so nice to me and my family." She called becoming a U.S. citizen in 2006, the greatest privilege in the world. She recognized Bob Dole, the only former Republican nominee in the audience. She thanked all the veterans in the audience. She said she was privileged to have been a fashion model.

She talked about Donald Trump's love for the United States. She said it was important to teach our children that the only limit on their future is the limit of their dreams because they live in the United States.

She promised Donald Trump would "fight for you because he does not give up and he will not let you down."

"His achievements speak for themselves and who knows how to win. He also knows how to focus on the security of our country and keep our future secure. He's tough one he has to be, but he's also kind and fair and caring," said Melania. Notably she talked about how inclusive he would be. That he would include Muslims, Jews, Christians, whites and blacks, rich and poor.

"It would not be a Trump contest without excitement and drama" she said to laughter, calling on the Republican Party to unite for the general election. She said the values the trumps would bring to the White House include kindness, love and compassion.

About a minute Melania's speech did bear unfortunately striking resemblance to Michelle Obama's 2008 DNC speech about her husband, Barack Obama. She should fire her professional speech writer for unintentional plagiarizing, RNC Chairman Reince Priebus said. Words echoed by fired Trump campaign chairman Corey Lewandowski. The Trump Campaign has said that no one will be fired over the incident. http://www.foxnews.com/politics/2016/07/19/some-melania-trumps-speech-at-gop-convention-similar-to-michelle-obama-speech.html

Melania Trump, 46, is a Slovene-American jewelry and watch designer and former underwear model. She married the American billionaire real estate developer and 2016 U.S. presidential candidate in 2005. They have a son together. Born in Yugoslavia (now Slovenia), she became a permanent resident of the United States in 2001 and a citizen in 2006.

"We're both successful businessmen, though I flew commercial here," said the star of Duck Dynasty. "We both have had hit TV shows, and we both have intelligent wives who are much better looking then we are. Are you cheering because you think we are ugly?

"As for the media, it must be humbling to be so wrong for so long. But I have a theory about how they missed the trump train. They don't like to hang out with people like us, who like to hunt, and fish, and pray and actually work for a living."

After moving to New York City in 1996, Melania Knauss met Donald Trump at a Fashion Week party in New York City in September 1998, while he was still married to (but separated from) Marla Maples; Trump attended the event with another date, and she initially refused to give Trump her phone number.

Melania broke off the relationship shortly after it began, but the couple reconciled after a few months. Although Melania moved into Trump Tower and began buying furniture at Sotheby's for the apartment, she maintained a separate apartment before their marriage. Their relationship gained attention after a 1999 interview on The Howard Stern Show and additional publicity after the 2004 launch of Trump's successful business-oriented reality television show, The Apprentice. Donald Trump described their long courtship in 2005: "We literally have never had an argument, forget about the word 'fight' ... We just are very compatible. We get along."

After becoming engaged in 2004, Donald Trump and Melania Knauss were married on January 22, 2005, at The Episcopal Church of Bethesda-by-the-Sea in Palm Beach, Florida, followed by a reception in the 17,000-sq.-ft. ballroom at Trump's Mar-a-Lago estate.

The event was attended by noted persons such as Katie Couric, Matt Lauer, Rudy Giuliani, Heidi Klum, Star Jones, P. Diddy, Shaquille O'Neal, Barbara Walters, Conrad Black, Regis Philbin, Simon Cowell, Kelly Ripa, then-Senator Hillary Clinton, and former president Bill Clinton, which is evidence of the personal relationship between the Clintons and Donald Trump. At the reception, Billy Joel serenaded the crowd with "Just the Way You Are" and supplied new lyrics about Trump to the tune of "The Lady Is a Tramp".

In 2006, Melania gave birth to Barron William Trump. Donald suggested his first name and Melania his middle name. As an infant, Barron reportedly occupied his own floor in the Trumps' apartment in Trump Tower in Manhattan, but often slept in a crib in his parents' bedroom. He plays golf with his father and is also reported to be fluent in Slovenian. He is said to like wearing a suit and tie, and Melania's nickname for him is "Mini-Donald"

In 2000, Melania Knauss appeared with Trump while he campaigned for the Reform Party 2000 presidential nomination and, several years later, she appeared in an advertisement for Aflac insurance in which she and the Aflac mascot, a duck, voiced at the time by comedian Gilbert Gottfried, exchange personalities via a Frankenstein-like mad experiment. 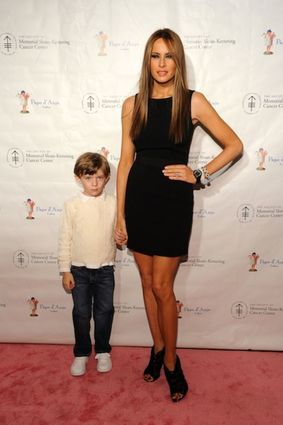 In 2015, asked about her husband's presidential campaign, Melania said, "I encouraged him because I know what he will do and what he can do for America. He loves the American people and he wants to help them." Melania with her son.

In 2015, asked about her husband's presidential campaign, Melania said, "I encouraged him because I know what he will do and what he can do for America. He loves the American people and he wants to help them."

During Donald Trump's 2016 presidential campaign, an anti-Trump PAC published an attack ad featuring a nude photo of Melania that was published in 2000 as part of a British GQ magazine photoshoot. The photograph shows her handcuffed to a briefcase, lying on a fur blanket aboard Donald's private jet.