She Sang the High Notes for Audrey Hepburn, Deborah Kerr and Marilyn Monroe

Marni Nixon, the Invisible Voice of Hollywood, has died at 86 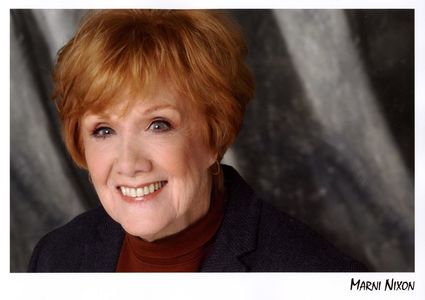 The singer's voice appeared, usually uncredited, in some of the biggest movie musicals of her era. She sang for Audrey Hepburn in My Fair Lady, for Deborah Kerr in The King and I, and hit the high notes for Marilyn Monroe in "Diamonds are a Girl's Best Friend."

She also "ghosted" nearly all of the singing for Natalie Wood in West Side Story.

Nixon's agent confirmed on Sunday that she died of breast cancer.

For much of her career, Nixon remained in the background. She would often be required to sign a contract promising to never reveal her contribution.

Because of her secretive work, Time Magazine once dubbed her "the ghostess with the mostess."

Nixon likened her work to that of a stuntman, and generally got on well with the women whose voices she dubbed.

"Stardom isn't the goal," she once told a reporter. "Staying in the industry and being successful at whatever you do is."

She spent long hours training alongside Audrey Hepburn in order to perfectly mimic both the Cockney and upper-class accents required of the character Eliza Doolittle in My Fair Lady. The two even traveled to work together each day.

It was Deborah Kerr, herself, who revealed and credited Nixon with the singing in The King and I, after Nixon had signed a non-disclosure agreement.

A conflict did arise with the filming of West Side Story. Starring actress Natalie Wood believed she would be doing most of the performing herself, but Nixon's voice was dubbed in for virtually all of the singing. Nonetheless, only Wood was credited on the album, and as a result, Nixon received no royalties.

Eventually, composer Leonard Bernstein gave up a percentage of his royalties and passed them on to Nixon.

Born in California, Margaret Nixon McEathron was an acclaimed performer even before her work in Hollywood.

She began playing violin at the age of four, and within months was selected to be in Karl Moldrem's Hollywood Baby Orchestra. She won a singing contest at the LA County Fair at age 11, and decided to give up the violin for voice.

Her first job dubbing the voice of a film actress arrived when she was working in the post room at MGM film studios, as a way of covering the cost of singing lessons.

Composer Bronislaw Kaper, who was working on the score for The Secret Garden, stopped her in the corridor and challenged her to sing a difficult song in Hindi. The teenager obliged and she was hired to sing for Margaret O'Brien in the film.

Despite having her voice appear on more than 50 soundtracks, she only sang once on screen, as Sister Sophia, one of the nuns performing "How Do You Solve a Problem like Maria?" in The Sound Of Music.

In later years, Nixon appeared as a soloist with the New York Philharmonic, performed on Broadway and even hosted an Emmy Award-winning children's television show called Boomerang.

She taught at the California Institute of the Arts, and toured for many years with Liberace.

She was married three times - first to Ernest Gold, the film composer behind Exodus and On The Beach, with whom she had three children. Their son Andrew went on to compose the Golden Girls theme "Thank You For Being A Friend."

She is survived by three sisters, two daughters, six grandchildren, and three great-grandchildren. 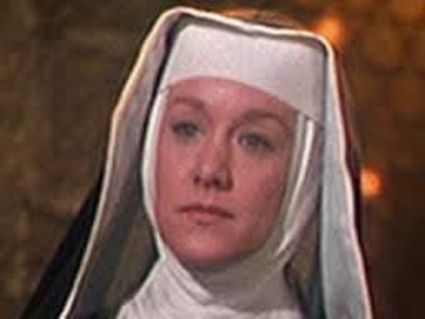 Marni Nixon as Sister Sophia in The Sound of Music.