Apparently the Olympics were much more lethal back in the day 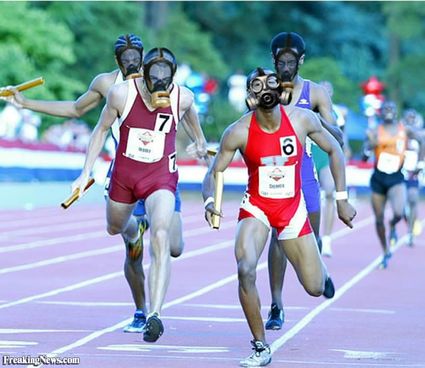 As the 2016 Rio Olympics stumble on; Twitter, that 140 character protocol for testing our ability to amuse total strangers, is ablaze this week with false Olympic history. Newspaper editors searching for news stories during the dog days of summer, are notoriously easy to amuse. So here's the top 20 we found at #FakeOlympicHistory :

3. From @derekkessenger: Trampoline Silver Medalist Lola Hopkins also used a trampoline as a robber to jump into second story windows.

4. From @StuckonSW The triple jump was invented when a sprinter stepped on a lego.

5. From @ Year of the Monkey Spank: Competitive face slapping used to be a thing.

6. From @GordonHelio: The silver medal has "Congratulations, you are the first loser" engraved on the reverse side.

7. From @dkobart: The Biathlon got its name after experimenting in College.

8. From @realjohnfrancis: At the first marathon, people were constantly reminded it was not a sprint. Hence the phrase, "it's a marathon, not a sprint."

9. From @JAGrahamSNR: Julius Ceasar was killed during the 44 BC Games after he supported the Roman Athletes using dope.

10. From @AEGreallive: Trump was going to add Crying Baby Skeet Shooting to the events, until his advisors suggested he re-think that.

11. From @realdavedoubleu: the discus was invented by ancient Greeks for battlefield pizza delivery.

12. From @gigirules7: The Olympic committee isn't giving medals to the winners. Everyone gets a participation trophy.

13. From @kattfunny: Marijuna had nothing to do with the Jamaicans coming up with the idea to form a bobsled team. 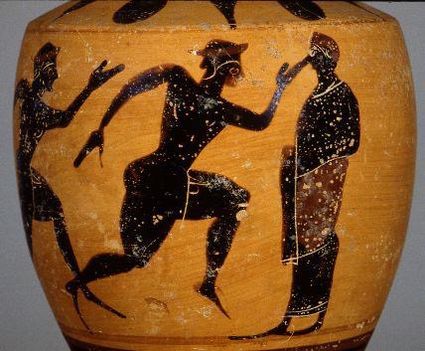 Competitive face slapping used to be a thing.

14. From @BrandonMckinnis: Greco Roman Wrestling was just something these 2 guys made up when they got caught.

15. From @Grosby81: Sydney 2000 Olympics, the athletes got around riding on Kangaroos

16. From @Josh_il_us: Runners up to the 5 golden rings logo was 4 calling birds.

17. From @aaronsayswhat1: Greco-Roman Wrestling started over a TV remote control

18. From @drhug: Athlete gives Donald Trump his Gold medal. "I always wanted one of these, but didn't want to work for it. Next to my Purple Heart