"The Candidate merely evidenced a startled reaction to a question about her Vice Presidential running mate." --Clinton campaign 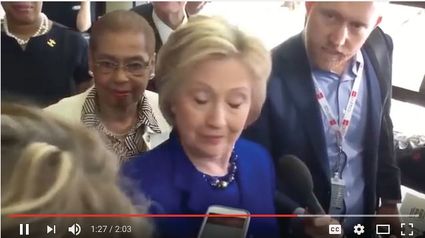 Screenshot from Video of Hillary Clinton suffering apparent stroke on camera. Our link to the video is below; click on the photo in the lower right.

An old story given new legs: New video has emerged showing Democratic Nominee Hillary Clinton suffering what looks like a stroke or epileptic seizure on camera. The video is embedded below. Is the media ignoring Clinton's glaring health issues?

In the video, Mrs. Clinton reacts to a softball question from a reporter ("How do you feel about receiving President Obama's endorsement?") by bobbing her head vigorously back and forth. She then says: "You guys have got to try the cold chai. It is delicious!" seemingly avoiding the question.

Clinton bashers say she had no idea what she had just been asked, having just suffered a stroke or seizure; or that Clinton was covering up her stroke as reaction to the caffeine. The video was filmed in June.

Snopes calls the allegation Clinton suffered a seizure on camera "Unproven." http://www.snopes.com/hillary-clinton-seizure-video/. The Clinton campaign explains the video as "merely a startled reaction to a question about her vice presidential running mate." We'll let you decide.

Questions about Clinton's health have long circulated, fed in part by her Republican opponent, Donald Trump. She seldom puts herself in a position where those questions can be asked and in truth, the media seldom asks them.

The Washington Times, a newspaper known for its Republican editorials, called on August 8, 2016 for Mrs. Clinton to release her medical records. http://www.washingtontimes.com/news/2016/aug/8/hillary-clintons-falls-recall-the-health-questions/

Instead, she released her and Bill Clinton's tax returns today, calling on Mr. Trump to do the same, and apparently seeking to deflect attention from the health issue.

Breitbart news, definitely no friend of the Clintons, recently published an article by the head of a physician's organization, asking why the mainstream media has asked so few questions about Mrs. Clinton's health, when she seems to need help simply walking upstairs.

Dr. Jane Orient, executive director of the Association of American Physicians and Surgeons, wrote "strangely silent is the mainstream media about the fitness" for presidential office of Hillary Clinton. At uAAPS' website, Orient summarizes the concerns about Clinton's health that she says are growing:

There's the photograph of Secretary Clinton's difficulty walking up some steps. Now inability to climb stairs does not necessarily disqualify a person for public office. However, neither she nor people with her apparently anticipated a problem. The people helping her seem to be preventing a fall. Did she simply trip? Or was it a seizure or a stroke?

The Washington Post, which has long been completely open about it's support of Clinton and opposition to Donald Trump, reported in 2013 that Secretary of State Hillary Clinton appears to be on the road to recovery from a blood clot near her brain caused by a concussion she suffered several weeks ago in a fall at her house.

The article is entitled "What Hillary Clinton's Health means for the election in 2016." What does it mean, indeed.

There is a history in this country of media silence about a President's physical condition. Reporters never showed pictures or film of Franklin D Roosevelt being helped to walk, or even pushed in wheelchairs. FDR never fully recovered from polio, and ultimately died of a stroke in office in 1945.

Now that she is the Democratic nominee, and with the Republican nominee so unsavory to 95% of the press; have reporters again declared a "national emergency?" Are they providing cover again, this time for Mrs. Clinton? Is she in fact suffering from Parkinson's disease? Is she subject to epileptic seizures?

Mrs. Clinton will be 69 on inauguration day, and is about 3 years younger than Mr. Trump. Libertarian presidential candidate Gary Johnson is 63. For his part, Trump earlier this year called into question (in decidedly offensive terms), Mrs. Clinton's failure to return from a bathroom break during a Democratic Primary debate.

Did you know that Hillary regularly takes blood thinners and thyroid tablets? For details on ten health questions that have dogged the Clinton campaign, see

The article details a history of coughing fits, blood clots, fainting and falling known to have affected the secretary of state, since 2012. Apparently you can tell when Clinton has recently fallen, because she wears prescription glasses for double vision.

Update: 8/17: Board-certified medicine specialist and TV personality Dr. Drew Pinsky said he is “gravely concerned” about Hillary Clinton’s health care, noting that the treatment she has received is “bizarre” and could explain the “weird side-effects” that people are seeing http://www.infowars.com/dr-drew-gravely-concerned-about-hillary-clintons-health/

It seems as if she's trying say ,You guys have got to try the cold Chai! , so you too can induce a seizure like the one you just witnessed.

I can't see her getting through the televised presidential election debates.

I wonder how she's going to make it through the televised presidential election debates?

Hillary Clinton is clearly sick. She can't even go to an event without collapsing. Her health is on the decline. She is not in condition to run the country. It is time Hillary faces the truth for once and realizes that she can't deceive the voters any longer. George Vreeland Hill

It's definitely a seizure of some sort, though not a grand mal seizure. I know the difference. I live with someone with epilepsy, and I've seen both kinds. I can't tell whether it's true epilepsy or as a result of her past serious blood clot. All I know is that she shouldn't be running for President! God bless her. She should be taking care of her health and enjoying a nice retirement.

I don't know if I should laugh or cry at stuff like this. I've seen the Hillary seizure video from several camera angles and it is crystal clear that she is exaggerating a startled double take when two reporters off to one side start asking questions simultaneously. In other words, she was clowning around with the reporters. If this is the best the anti-Clinton forces have to offer, she might as well take the oath of office right now.