Witness: He had just been dropped off by his father. He was on the island where it was permissible for passengers to wait for trains 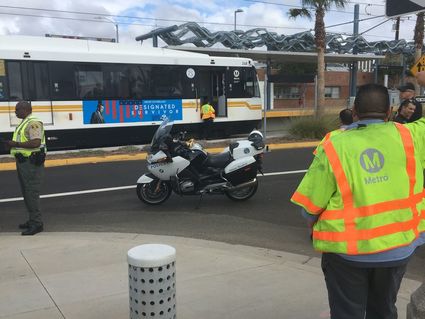 A young man suffered cuts and bruises as an Eastbound Exposition Line train pulled out of the 17th Street Station on September 13th. This caused the train to sit on Colorado Blvd for almost 2 hours.

A woman who claims to be an eyewitness says that the young man had just been dropped off by his father. He was on the island where it was permissible for passengers to wait for the train, and the train hit him anyway breaking his collarbone.

Los Angeles County Sheriffs Department, MTA police, Santa Monica Police Department, and MTA workers all responded to an Expo train versus pedestrian accident. Many passengers were late to work as a result. 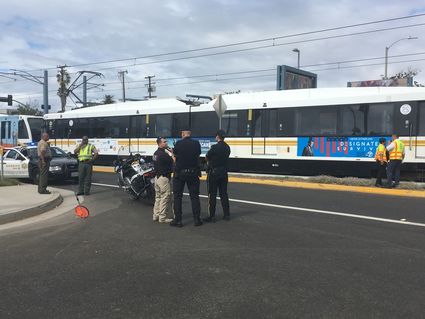 A Metropolitan transit worker told the Santa Monica Observer that today's incident at 17th St. on the Eastbound Expo line did not result in serious injuries to the young man, a Santa Monica College student. "He just kind of bounced off the train. He had some cuts and scrapes. They took him to the hospital. If I did that, I'd probably be dead, but you know, 20 year olds."

The 17th Street Station is the first station East of the 4th Street Colorado Blvd Station, which is the terminus of the Exposition Line Train. It is a few blocks from SMC's main campus.

Subject: We want you to be safe

Never run after or next to a moving bus or train - just hang tight and wait for the next one. Wait for the vehicle to stop before approaching. We want you to be safe.

For how to ride to SMC, go to http://www.smc.edu/metro