The Jan Brady of the Trump clan is the obvious culprit. Who would suspect her? Who could blame her? 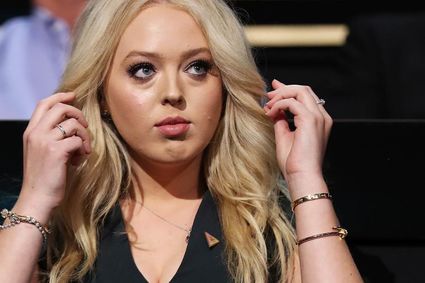 "What me?" Tiffany trump is the obvious suspect for the leak on her dad's tax returns

The story does leave us with an obvious question: Who gave the New York Times the Donald's tax returns?

The Times says Donald's returns "were surreptitiously left in our mailbox." Sure, but by whom? The obvious culprit: Tiffany Trump, the only child of Marla Maples and Donald Trump, whom we have previously described as the Jan Brady of the Trump clan. http://www.smobserved.com/story/2016/10/02/politics/tiffany-trump-is-the-jan-brady-of-the-trump-clan-destined-to-be-overlooked/2011.html

Here's the circumstantial case against Tiffany, taken mostly from the Twitter Storm. It shows motive opportunity and even an alibi:

1. The New York Times ran a feature article the same day as the Trump Tax Story. Entitled "The Other Trump," it is largely a puff piece speculating that "fashionable" Tiffany may play a larger role in her father's campaign. http://www.nytimes.com/2016/10/02/fashion/tiffany-the-other-trump.html?_r=0

3. Tiffany is well, the Jan Brady of the Trump clan. She would gain little from a Trump presidency, and may even want to bring down her father, half brothers and sisters.

4. Tiffany is 22 and easily taken advantage of by a sharp New York Times reporter.

5. Trump could've made a phone call (i.e. to the family's certified public accountant), and obtained a copy of the 1040's. Perhaps she needed them in order to complete her own returns. Or to apply for financial aid.

6. Tiffany's mother, Marla Maples was married to Trump in 1995, so if she chose to send part of HER tax form to a reporter, it was perfectly legal for her to do so. So Tiffany had a built-in alibi.

7. There is a theory that after the last debate, it became obvious to everyone that Donald Trump hadn't paid taxes since 1996. So said Charles Krauthammer, for one. That being the case, Tiffany may have calculated it was best for her Dad's presidential chances to just get past the issue, and hope the American public forgives the Donald for this, as they have for so much else. 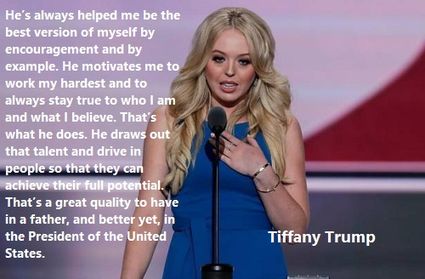 Tiffany Trump addressing the Republican national convention about her dad

"No one suspects Tiffany, because no one acknowledges Tiffany," tweeted Leon Langford. "Right now, @TiffanyATrump is beating a hasty retreat out of Midtown Manhattan, while sporting some suspicious paper cuts," tweeted @TaraDublinRocks.

I have to admit that having taken the H&R Bloch Tax Preparation Course, I'm puzzled by why this story is big news. All of us get to write off our losses against income, and billionaires like Donald Trump have larger losses when they screw up. Investing in an Atlantic City, New Jersey Casino, was a major mistake. When Trump finally accepted defeat, all he took away from it was a $916,000,000 loss. Any taxpayer would've taken advantage of that. Warren Buffet once pointed out that he pays less in taxes than his secretary. Huge losses are the reason why.

Buffet pays a lower tax rate than his secretary because capital gains are taxed at a much lower rate than ordinary income.

Like Trump needs any help bringing himself down.. With his idiot racist remarks and his copy-paste speeches the man sure loved the taste of crow. What a joke. Idk who's worse, him or Hillary. Another year of being embarrassed to vote for president at the polls. Lets just pray the Senate/house has common sense otherwise we are all screwed. A screw up for president with a first lady who's greatest accomplishment is Playboy.

The speech writer did it with the candlestick in the library. Remember, Bill Clinton was president. I wonder if Trump was audited in 1995?

Sure. The old blame game being played. Must have been a Trump family member who leaked it ? Obviously just another ploy to try & bring Donald down !