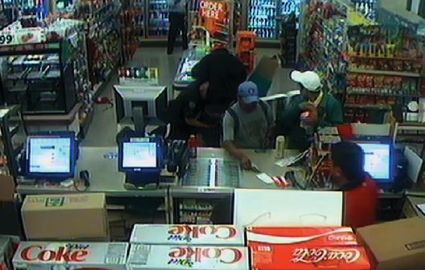 The 7/11 at 16th Street and Santa Monica Blvd was the scene of a life or death struggle between a man and an SMPD officer last night. The SMPD Officer had previously arrested Darryl McIntosh, who wanted revenge.

A fight broke out when a police officer entered the 7-11 at about 7:25 p.m. on Oct. 28 to buy coffee. At the same time the suspect, Darryl Andrew McIntosh, also walked into the convenience store and deliberately shoved the police officer, said Santa Monica Police Department spokesman Lt. Saul Rodriguez.

The police officer tried to take the suspect into custody, but McIntosh allegedly did not comply and instead struggled with the officer for several minutes during which he is accused of "gouging the officer's eyes," SMPD said in a statement.

"It was a very violent struggle where the officer was fighting for his life," SMPD Lt. Saul Rodriguez said. "At some point the officer pulled out his firearm to basically tell him if he doesn't give himself up, he will shoot him if he has to."

After calling for backup, a second police officer arrived on scene and subdued McIntosh with several strikes from a police baton, according to officials.

McIntosh, 28, was arrested and booked on charges of mayhem, battery on a police officer and resisting an officer by means of force or violence, officials said.

The police officer suffered a head injury and multiple lacerations. He was taken to a local hospital for treatment and released later that evening.

Authorities detained McIntosh on $100,000 bail at the Los Angeles County Jail. He is scheduled to be arraigned on Wednesday.