Noam Chomsky: "Republican Party Is The Most Dangerous Organization in World History"

Chomsky claims to have been warning for years about the rise of a "Demagogue like Trump." 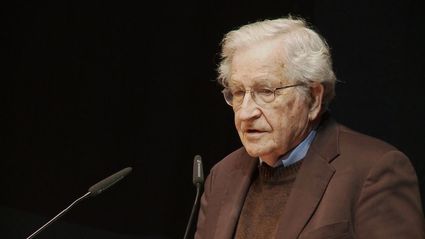 Chomsky believes that the basic principle of the foreign policy of the United States is the establishment of "open societies" which are economically and politically controlled by the U.S. and where U.S.-based businesses can prosper.

Professor Noam Chomsky has been blamed more than any other single person, for the wave of political correctness that has swallowed academia. Now, in an interview with Truthout.org, Chomsky fought back against the man elected by Americans as the antidote to his philosophy. http://www.truth-out.org/opinion/item/38360-trump-in-the-white-house-an-interview-with-noam-chomsky

"On November 8, the most powerful country in world history, which will set its stamp on what comes next, had an election," Chomsky said. "The outcome placed total control of the government - executive, Congress, the Supreme Court - in the hands of the Republican Party, which has become the most dangerous organization in world history."

Chomsky claimed that the impact on climate science alone was frightening.

"The winning candidate, now the president-elect, calls for rapid increase in use of fossil fuels, including coal; dismantling of regulations; rejection of help to developing countries that are seeking to move to sustainable energy; and in general, racing to the cliff as fast as possible, " he said before adding, "It is hard to find words to capture the fact that humans are facing the most important question in their history - whether organized human life will survive in anything like the form we know - and are answering it by accelerating the race to disaster."

Turning to how it was that Trump came to be elected, the lecturer and author said no one should be surprised and that he has been warning of a Trump-like demagogue for years.

"For many years, I have been writing and speaking about the danger of the rise of an honest and charismatic ideologue in the United States, someone who could exploit the fear and anger that has long been boiling in much of the society, and who could direct it away from the actual agents of malaise to vulnerable targets," he explained. "That could indeed lead to what sociologist Bertram Gross called 'friendly fascism' in a perceptive study 35 years ago. But that requires an honest ideologue, a Hitler type, not someone whose only detectable ideology is 'Me.' The dangers, however, have been real for many years, perhaps even more so in the light of the forces that Trump has unleashed."

Asked about the potential for Trump to return to the aggressive militaristic ways of the President George W. Bush era, Chomsky said that was an open question given Trump's erratic history of saying one thing and then contradicting himself moments later.

"I don't think one can answer with any confidence. Trump is too unpredictable. There are too many open questions. What we can say is that popular mobilization and activism, properly organized and conducted, can make a large difference," he remarked before adding ominously, "And we should bear in mind that the stakes are very large."

Avram Noam Chomsky, 88, is an American linguist, philosopher, cognitive scientist, historian, social critic, and political activist. Sometimes described as "the father of modern linguistics", Chomsky is also a major figure in analytic philosophy, and one of the founders of the field of cognitive science. He is Institute Professor Emeritus at the Massachusetts Institute of Technology (MIT), where he has worked since 1955, and is the author of over 100 books on topics such as linguistics, war, politics, and mass media. Ideologically, he aligns with anarcho-syndicalism and libertarian socialism.

Chomsky's published work has focused heavily on criticizing the actions of the United States. Chomsky believes that the basic principle of the foreign policy of the United States is the establishment of "open societies" which are economically and politically controlled by the U.S. and where U.S.-based businesses can prosper.

He argues that the U.S. seeks to suppress any movements within these countries that are not compliant to U.S. interests and ensure that U.S.-friendly governments are placed in power.

When discussing current events, he emphasizes their place within a wider historical perspective. He believes that official, sanctioned historical accounts of U.S. and British imperialism have consistently whitewashed these nations' actions in order to present them as having benevolent motives in either spreading democracy or, in older instances spreading Christianity; criticizing these accounts, he seeks to correct them.

Chomsky explains his decision to focus on criticizing the U.S. over other countries as being because during his lifetime the country has militarily and economically dominated the world, and because its liberal democratic electoral system allows for the citizenry to exert an influence on government policy.

His hope is that by spreading awareness of the negative impact that imperialism has on the populations affected by it, he can sway the population of the U.S. and other countries into opposing government policies that are imperialist in their nature. He urges people to criticize the motivations, decisions, and actions of their governments, to accept responsibility for one's own thoughts and actions, and to apply the same standards to others as one would apply to oneself.

He has been critical of U.S. involvement in the Israel-Palestine conflict, arguing that it has consistently blocked a peaceful settlement. Chomsky has long endorsed the left binationalist program, seeking to create a democratic state in the Levant that is home to both Jews and Arabs.

However, acknowledging the realpolitik of the situation, Chomsky has also considered a two-state solution on the condition that both nation-states exist on equal terms. As a result of his criticisms of Israel, Chomsky was barred from entering Israel in 2010.

In his youth, Chomsky developed a dislike of capitalism and the selfish pursuit of material advancement. At the same time he developed a disdain for the authoritarian attempts to establish a socialist society, as represented by the Marxist–Leninist policies of the Soviet Union. Rather than accepting the common view among American economists that a spectrum exists between total state ownership of the economy on the one hand and total private ownership on the other, he instead suggests that a spectrum should be understood between total democratic control of the economy of the one hand and total autocratic control (whether state or private) on the other. He argues that Western capitalist nations are not really democratic, for in his view, a truly democratic society is one in which all persons have a say in public economic policy.He has stated his opposition to ruling elites, among them institutions like the IMF, World Bank, and GATT.

Chomsky highlights that since the 1970s, the U.S. has become increasingly economically unequal as a result of the repeal of various financial regulations and the rescindment of the Bretton Woods financial control agreements.

He characterizes the U.S. as a de facto one-party state, viewing both the Republican Party and Democratic Party as manifestations of a single "Business Party" controlled by corporate and financial interests.

Chomsky highlights that within Western capitalist liberal democracies, at least 80% of the population has no control over economic decisions, which are instead in the hands of a management class and ultimately controlled by a small, wealthy elite. 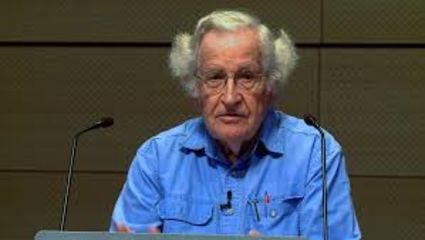 Chomsky argues that the U.S. seeks to suppress any movements within these countries that are not compliant to U.S. interests and ensure that U.S.-friendly governments are placed in power.

"On November 8, the World Meteorological Organization (WMO) delivered a report at the international conference on climate change in Morocco (COP22) which was called in order to carry forward the Paris agreement of COP21. The WMO reported that the past five years were the hottest on record. It reported rising sea levels, soon to increase as a result of the unexpectedly rapid melting of polar ice, most ominously the huge Antarctic glaciers. Already, Arctic sea ice over the past five years is 28 percent below the average of the previous 29 years, not only raising sea levels, but also reducing the cooling effect of polar ice reflection of solar rays, thereby accelerating the grim effects of global warming. The WMO reported further that temperatures are approaching dangerously close to the goal established by COP21, along with other dire reports and forecasts."

Another event took place on November 8, which also may turn out to be of unusual historical significance for reasons that, once again, were barely noted."

On November 8, the most powerful country in world history, which will set its stamp on what comes next, had an election. The outcome placed total control of the government -- executive, Congress, the Supreme Court -- in the hands of the Republican Party, which has become the most dangerous organization in world history."