Sea Star Wasting Syndrome decimates sea star populations along the western coast of North America for the past several years. 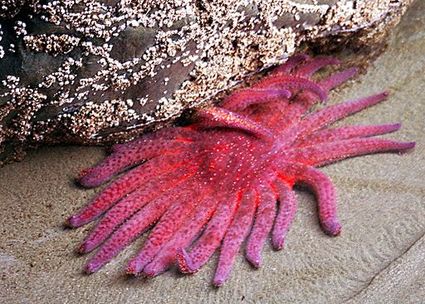 A healthy pink sunflower sea star takes shelter in a tide pool in British Columbia. Below is an image of a dying sea star.

While the people of North America have been squabbling over truck routes and pipelines across the continent, there is a population that really could not care less. Their arms are falling off.

And no matter what happens with the Great Wall of America or the DAPL pipeline, this population of underserved yet beautifully simple individuals will crumple into a sad moldy mound unless we take action. Said population, as you might have guessed, consists not of two-legged folk but of sea stars.

Sea Star Wasting Syndrome (SSWS) is an enigmatic illness that has been decimating sea star populations all along the western coast of North America for the past several years.

Although regional outbreaks of a similar nature have struck sea stars before, never before has the epidemic covered such an expansive stretch of coastline, all the way from Mexico up to Alaska. Furthermore, in past decades, the syndrome did not end up hacking an irreparable dent in the overall star population. Scientists have yet to agree on an exact explanation for SSWS. However, the current outbreak is characterized by extremes: extreme symptoms and extreme numbers of affected individuals. In search of the probable cause, scientists have measured water temperatures in the worst epicenters. They found that waters containing the most diseased sea stars were warmer than normal. Since pollution and the resulting acidification and greenhouse gases all make the ocean warmer, it is possible that humans are contributing to the syndrome's severity. It's also probably linked to a natural cycle, as are ice ages and tsunamis. However, as with all natural cycles, when unprecedented human disruption concords with the biases of extreme trends, the effects overflow; the pendulum swings past its highest extremes and breaks the walls that contain life. This is why it is critical not to push a naturally turbulent ecosystem even closer to its most dangerous limits.

So just how does a sea star waste? If you must know, it basically turns into a zombie. I'll give you the most disturbing X-rated description the disease deserves, and you can avert your eyes as needed. Here goes: within a matter of days, lesions on the outer skin become yawning holes, leaving arms hanging on by threads. The arms will sometimes tie themselves in knots around the body, trying desperately to prevent an explosion.

Eventually, the holes get so severe that the arms fall off, the animal's internal organs spill out from the central oral disk, and it dies. In some cases, the arms give up on their graying body slightly before death, and they rip themselves off the body and walk away. Neither the armless body nor the infected stray arms survive long.

The disease seems to spread from star to star and from species to species, affecting first the ochre star and the sunflower star. The latter is an especially crucial predator in the subtidal ecosystems it inhabits. Trust me, I know this thing is killer. I worked with one at the Santa Monica Pier Aquarium last summer, and its giant, puffy pudding-like body with exactly nineteen gripping arms fascinated and horrified hordes of visitors. While some described it as a teddy bear, the aquarists knew its eating habits and advised that all other small invertebrates be kept in quarantine to save their lives.

We also had to be careful that it didn't spawn, because its archangelic reproductive methods involve a cloud of poisonous gametes (egg or sperm cells) that would harm anything that happened to be in the water at the time. But because this king of the seafloor is so delicately constructed, its mushy body is especially susceptible to lesions and all the other ripping tearing stuff. Without the sunflower star (and other predatory stars), snails will overpopulate and the ecosystem will be thrown out of balance, possibly leading to dead zones if the snails overgraze their own food sources.

This all tends to depress people. But I'm not going to stop telling you about it. Instead, here are some positive things you can do to help. For one, scientists are collecting reports of any and all sea star sightings along the North American coastline; you can find more details and send in your pictures at http://www.eeb.ucsc.edu/pacificrockyintertidal/data-products/sea-star-wasting/observation-log.html#track-disease. MARINe and Pacific Rocky Intertidal Monitoring also see some chance of hope in the form of baby stars: perhaps resistant offspring will recolonize depleted areas and recommence the snail patrol left off by their echinoderm ancestors. 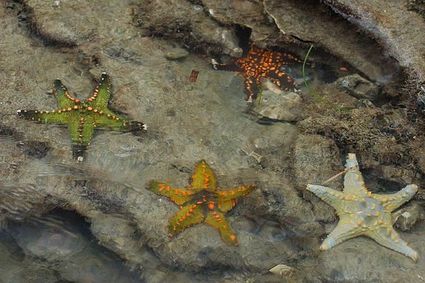 A jewelry box of Tanzanian sea stars winks peacefully from behind a veil of rippled water.

"Refuges" are also a possibility: if there is even a small spot, an offshore dock for instance, where sea stars have been protected from the disease, these stars can be studied and further protected, as well as protecting and trying to reproduce their sheltered habitat in other areas. Above all, the ensemble of researchers studying this disease emphasizes the importance of everyday people's participation. Understanding what is going wrong is a critical step towards solving the problem.

Furthermore, if people notice and care and live in the midst of these animals, they are more likely to let them into their laboratories and lives, to save them and help them produce future generations. For a list of regional research groups that need citizen help, click here: http://www.eeb.ucsc.edu/pacificrockyintertidal/data-products/collaborative-monitoring/index.html