Conspiracy Theory 101: There's no way the recounts can finish in time 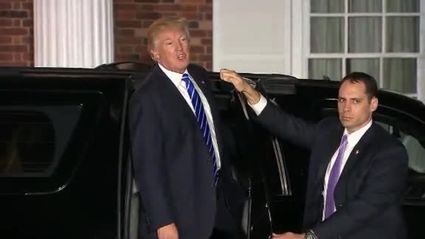 Donald Trump's campaign filed a lawsuit to block the Wisconsin recount. Why?

Jill Stein received just under 1% of the national vote, and demanded recounts in Wisconsin, Michigan and Ohio. Hillary Clinton's Presidential Campaign filed joinders to Stein's effort, and by some accounts, directed donations to her political action committee. But why? Recounts historically have never changed the outcome of a State's presidential election outcome. They are costly and tedious, as they must be observed by campaign representatives.

One theory is that Stein is simply hoping to disrupt the electoral college process to push the 2016 election into the hands Congress while casting a shadow on the legitimacy of Donald Trump's presidency.

Under Federal law, electors from around the country have to meet by December 19, 2016 to cast their electoral college votes. Imagine if recounts in Michigan, Wisconsin and Pennsylvania remain incomplete on December 19--many experts say they cannot be completed within 2 weeks.

If the electoral votes from those three states are disqualified and not counted, neither Trump nor Clinton will have with the required electoral votes to win the presidency. By one count, the vote would be 260 for Donald, and 232 for Hillary. Both would fall short of the requisite 270.

If the electoral college process fails to select a President then the Presidential election would be decided by the House of Representatives, who must choose among the top 3 candidates in the election. Since the House has a Republican majority, it seems likely that they would choose Mr. Trump. The Republican controlled Senate would choose Mike Pence as Vice President.

Why bother? It's the legitimacy thing. Mrs. Clinton received 2.5 million more popular votes than Mr. Trump. If Congress has to ultimately elect the President and Vice President, it would underline this situation. At a time when the Democratic party must reinvent its brand, this could be helpful with fundraising and bringing out the base in the midterm elections 24 months from now.

Wisconsin's recount will likely begin late next week, once the state has tallied a cost estimate and received payment from Stein's campaign, said Michael Haas, administrator of the Wisconsin Elections Commission. 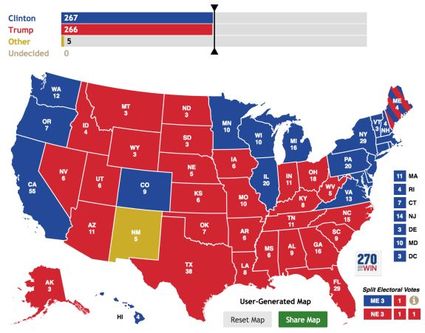 Expected result before the election. The blue firewall did not hold for Democrats.

Political scientist Barry Burden, the director of the Elections Research Center at the University of Wisconsin-Madison, said it would be extremely difficult to complete the recount on time.

"You may potentially have the state electoral votes at stake if it doesn't get done by then," said Haas.

A lawyer with Stein's campaign has said it wants the recount done by hand. That would take longer and require a judge's order, Haas said.

Perhaps the most important deadline is Dec. 19, when electors around the country must meet to cast their Electoral College votes, said Edward Foley, an expert in election law at Moritz College of Law at Ohio State University.

"That is a hard deadline and if a state were to miss that deadline, it would be technically in jeopardy of not having its electoral votes counted," he said.