City Could Evict Airport Tenants and Close Operations, In Spite of the Federal Government 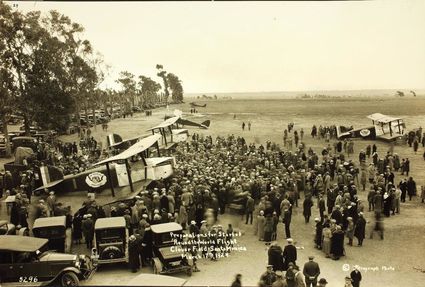 Row of biplanes 'Air Service USA World Flight' for the 'Round the World Flight" at Cloverfield airport, 1924. The Santa Monica airport has served its purpose, and today serves only the rich.

For the second time since Santa Monica Airport was set to close in July 2015, a brand new jet service is setting up new scheduled services.

Jet flight operations are up 15% since July 2015, when all jet tenants agreed explicitly in writing to leave – the "surrender clauses" in their leases. 15 jets owned by a billionaire and others have paid no rent for one year and have not been asked to leave.

The City Council and City staff are on the side of residents and have taken two actions that are "symbolic", but do little to change the steeply increasing number of jet flight operations. We are thankful they are on our side, but how bumbling of them. 18 months have passed, they have done almost nothing in the face of ruthless and aggressive actions by jet flight operators. Residents get symbolism, but billionaires with jets get what they want. The City Councilpersons are not stupid, they know what they are doing.

First, the August 23, 2016 adoption of a closure resolution seeks to close the Airport by December 31, 2018. Unfortunately, this symbolic act has not been followed by any concrete action. The Aug 23 resolution also sets up a City "fixed base operation" to replace Atlantic. But this goes slowly and residents pleas to "surge" staff are ignored. I personally authored most of the language in the Closure resolution and the City FBO policy, so I support it. But again, it is only symbolic without follow-up.

And second, slated to go out next week, is City's "Notice of Abandonment", that would take the Western Parcel out of airport use, to dedicate to a park. Ben Wang, head of http://www.smofuture.com , was the main author and we applaud him, and the City Council for authorizing it. This would shorten the runway by 1800 feet, rendering impossible operation of most jets. But the FAA may approve or disapprove of runway changes, so again this is "symbolic". Again no concrete action

In the meanwhile, the FAA has issued a "cease and desist order", a meaningless legal hoax aimed to stop the City from evicting Atlantic Aviation, the originator of 90% of the jet operations at the City. The order covers only one City action – evicting Atlantic Aviation, and nothing else. So all of the steps below might proceed without violating the FAA order. But if the City violates the order, two things would happen.

First, the City would lose future Airport funding, this is for sure. The City should "acquiesce" in this loss of funding, who cares.

And second, the FAA might seek a federal injunction against eviction of Atlantic Aviation, this is a 50-50 chance (as most FAA senior officials are leaving before Trump's draconian 5-year ban on federal lobbying goes into effect). The Dept of Justice has to agree that an injunction is meritorious, which it is not.

Why would we win an injunction fight?? Four reasons, any one of which is over 75% likely to prevail. Atlantic Aviation agreed explicitly in writing leave. The FAA's only penalty is loss of AIP funding, to which the City "acquiesces". The grant assurances upon which the order depends ended in 2014. The City is setting up its own FBO. Any one of those arguments is a winner, we have four.

But without violating the FAA order, there are many things to do to decrease jet flight operations, increase Airport revenues in the long run, and prepare for transition of the Airport into a park with a limited number of Silicon Beach businesses embedded to fund park construction.First, the City should close for environmental remediation and renovation Santa Monica Air Center and all City hangars (there are six large sets already under City control). Any tenant refusing to go should be evicted, aviation and non-aviation alike, and be sued for monetary damages. In the long run, these structures can be rented for far more money than they are bringing in now. The City has 100% right to close down buildings for environmental remediation and renovation.

Second, the City should lease now all Atlantic Aviation and American Flyers hangars and offices and tarmac to Snap, Inc. (other than a few necessary to provide City FBO services). Snap, Inc has indicate it will take them. There would be a clause in the lease requiring the City to evict Atlantic, and no damages would accrue to the City if this took some time. If Snap won't sign this lease, then who among you will join me in forming a company to do the same thing?? I'll seed it with some savings, and maybe some of you will too, not much is required. We will then assign the same lease to Snap after some legal actions, and make a little money.

Third, the City should immediately take out of airport use the Western Parcel except the runway. No FAA approval is required to do this. But all aviation and non-aviation tenants could be evicted (or approved) and at least one building should be demolished to provide more parkland. This one action would provide about 36 acres of park, triple the recent addition of 12 acres. 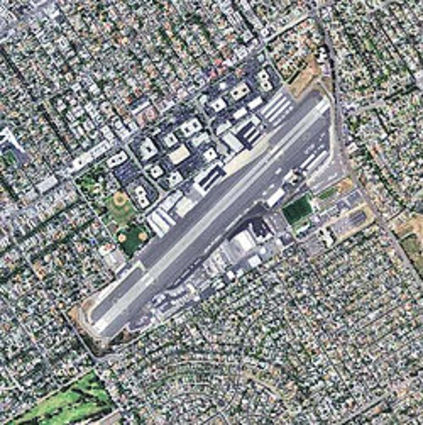 Today, no airport in America is closer to high density housing.

Fourth, the City should seek monetary damages from all aviation lessees which promised to leave, but did not. These are "surrender clauses" in expired lease agreements that may be enforced now, with attorney's fees clauses to provide punch. Given the City's $3 million legal bill since July 2015, this is a powerful hammer to force out aviation tenants who explicitly agreed to leave 18 months ago!! If the City loses to the FAA in other legal actions, it would simply dismiss these lawsuits – no big deal.

WHY HAVE YOU NOT PUBLISHED MY COMMENT FROM LAST NIGHT???

Stein says: We will then assign the same lease to Snap after some legal actions, and make a little money–unquote. Ah, the truth at last. Correct me if I'm wrong, but didn't a handful of Santa Monica citizens loose their shirts in an anti-slapp suit over Measure D in the last election despite assurances from the author that they were in no danger if they did what he said? The last time the City acted on ill-considered and bad advice like this, it ended up with a 30 yr. contract with the FAA to run SMO. I understand there will shortly be an opening for City Attorney. Maybe they'll hire the author.He seems to think he knows more than anyone else.

Look at tha aerial photo of the airport and ask yourself if that it is not insane to fly jets a couple hundred feet from homes and families and schools below. The airport was never intended to be used as a commuter terminal as aviation interests would like. Time to close and honor an institution and airfield that no longer is compatible. We know too much today about lead, noise and volatile compounds that harm and kill, and the damage a jet crash can cause. Accidents do happen.

Just get rid of the noisy jets and turn it into a park asap.

As I only get 1000 characters I have chosen to offer one very important correction to the authors story. Its full of falsehoods but this one is important for readers to understand. If the City violates the FAA order OR tries another method to achieve the same result, the FAA can have the Dept of Transportation withhold DoT funding from the City of Santa Monica. The author asks; Who Cares? The answer? Everyone in Santa Monica should care a great deal about the sudden loss of DOT funding as it would cripple the city financially. As wealthy as the City is, the loss of that money would be catastrophic to the City and everyone would feel the pinch almost instantly. The author has nothing to lose in this. Of course he is fine with taking chances with funding etc etc. Keep playing games with the FAA over the airport and I promise, the City will not enjoy the results. Nor will the City's residents. The city has lost at every turn. That isn't going to change.

How ludicrous to claim that the airport only serves the ultra rich! I for one am sick and tired of these anti airport clown's lies and PR spin machine. None of the several hundred plus people I know that work at businesses located at the airport are ultra rich or even middle of the road rich. They are working for a living and doing their best to get by in the single most expensive city in Los Angeles to rent in. The average apartment in Santa Monica runs 3000 dollars per month. None of the people I know who work at the airport can afford that. Get it straight Mr Stein. YOU want to close the airport for no other reason then to make your own property more valuable...and you are willing to cost hundreds of people their jobs to obtain that which you want. Thankfully, the FAA and the Federal Courts aren't marching to your drum but are making sure the City adheres to the Instruments of Transfer that govern the whole situation. Maybe its you who should leave if its such a big deal eh?

Interesting read. Unfortunately however, the author, Mr Stein chooses to ignore virtually all of the facts. Mr Stein claims there has been No Concrete action by the City to close the airport since the Aug 23rd Council meeting. That simply isn't accurate. The City did act and they were told No, and rightfully so. The City attempted to evict two good standing longtime businesses from the airport and they met with a resounding no from the FAA, who has clear authority over this issue. Here is the simple truth instead of the long winded assertions of the author. The City entered of its own freewill into a legal an binding agreement to keep this airport open and AVAILABLE TO ALL and to do so forever. Now the current leadership and a few neighbors who are seeking property value increases, want to renege on that agreement. The FAA is not allowing it and the Courts are also not allowing the City to break that agreement. Its as simple as that. If you don't like it Stein...MOVE.