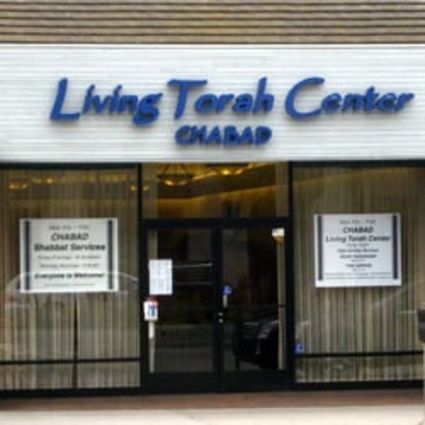 The Living Torah Center on Wilshire Blvd in Santa Monica, was the subject of an anti-Semitic attack, said Breitbart.

12/25: The Chabad Lubavitch Synagogue on Wilshire Blvd was smeared with dog feces on Sunday morning, reports Breitbart news. The Rabbi cleaned it up as best he could and let in congregants for morning prayers.

Sunday was the first full day of Hanukah, and a menorah in the window may have attracted attention.

According to the LA Times, Congregants arriving for prayers on Sunday morning at the Living Torah Center, a synagogue affiliated with the Orthodox Chabad movement, were shocked by the vandalism, which one of the rabbis cleaned as best he could before services.

Some feces remained lodged in the upper corner of the building's facade, and on a window facing Wilshire. http://www.latimes.com/local/lanow/la-me-ln-synagogue-vandalism-20161225-story.html

Rabbi Boruch Rabinowitz told Breitbart News that the attack was not random. Assistant Rabbi Dovid Tenenbaum, who serves as a chaplain with the local police department, called in a report.

"Santa Monica is a predominantly liberal, Democratic city, surrounded on three sides by Los Angeles, and takes pride in an image of tolerance," notes Breitbart.

An African American man with a gun, apparently homeless, burst into services at the same synagogue in November, threatening congregants. Santa Monica Police issued an alert with a photo of the suspect from behind. 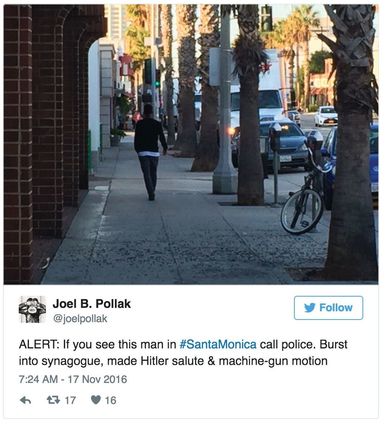 Police are looking for this man who burst into a synagogue in November, waving a gun

Ḥanukah, which is transliterated into English in about 8 different ways, is a Jewish holiday commemorating the rededication of the Holy Temple (the Second Temple) in Jerusalem at the time of the Maccabean Revolt against the Seleucid Empire. Hanukkah is observed for eight nights and days, starting on the 25th day of Kislev according to the Hebrew calendar, which may occur at any time from late November to late December in the Gregorian calendar. It is also known as the Festival of Lights and the Feast of Dedication.

The festival is observed by the kindling of the lights of a unique candelabrum, the nine-branched menorah (also called a Chanukiah/ Hanukiah), one additional light on each night of the holiday, progressing to eight on the final night. The typical menorah consists of eight branches with an additional visually distinct branch. The extra light, with which the others are lit, is called a shamash (Hebrew: שמש‎‎, "attendant") and is given a distinct location, usually above or below the rest. Other Hanukkah festivities include playing dreidel and eating oil-based foods such as doughnuts and latkes. Since the 1970s, the worldwide Chabad Hasidic movement has initiated public menorah lightings in open public places in many countries