Bible commands we love our neighbors, make disciples of all nations 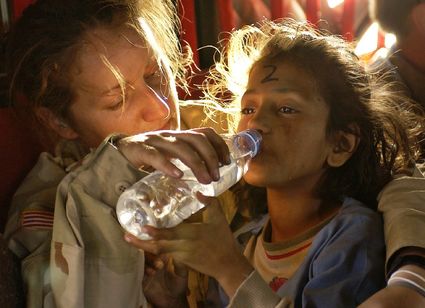 An American aid worker offers water to a refugee girl who was numbered as she entered the camp.

A group of Evaqngelical Christian leaders sent a letter to Donald trump on Sunday, January 29, requesting that he allow refugee families resume movement into the United States immediately.

They point out that refugees are already extremely well-vetted, and it is a part of Christianity to offer aid to those in need.

Many Americans are stunned by the new President's executive order banning entry of nationals from seven different countries. Unlike an Obama order that temporarily slowed the processing of Iraqi refugees in 2011, The Trump order was not based on any specific threat, and it halts movement altogether, even for those who are already legal green-card residents of the US. Trump failed to consult immigration or legal authorities before writing his possibly unconstitutional order, creating an implementation nightmare in airports across the country.

This has led some sorrowful stories, such as a 5-year-old who was held alone for 10 hours before being released to his American parent, a woman and two children held for 20 hours without food, and a sickly 70--year-old grandma who has been stranded at an airport in Istanbul.

The full text of the letter is below.

As evangelical Christians, we are guided by the Bible to be particularly concerned for the plight of

refugees, individuals who have been forced to flee their countries because of the threat of persecution.

Evangelical churches and ministries have long played a key role in welcoming, resettling, and assisting in

the integration of refugees from various parts of the world. As such, we are troubled by the recent executive order temporarily halting refugee resettlement and dramatically reducing the number of refugees who could be considered for resettlement to the U.S.

The Bible teaches us that each person - including each refugee, regardless of their country of origin, religious background, or any other qualifier - is made in the Image of God, with inherent dignity and potential. Their lives matter to God, and they matter to us. While the U.S. has in recent years received only a fraction of 1 percent of the world's refugees annually, we believe the refugee resettlement program provides a lifeline to these uniquely vulnerable individuals and a vital opportunity for our churches to live out the biblical commands to love our neighbors, to make disciples of all nations, and to practice hospitality.

Our faith also compels us to be concerned with the well-being of families. Most of the refugees admitted to the U.S. in recent years are family reunification cases, coming to join a relative already in the country. A temporary moratorium will unnecessarily delay families whose cases already have been screened and approved from being reunited.

We fully affirm the important role of the U.S. government in vetting and screening those considered for resettlement to our country; indeed, it is a God-ordained responsibility of government. However, the U.S. refugee resettlement program's screening process is already extremely thorough - more intensive, in fact, than the vetting that is required of any other category of visitor or immigrant to our nation - and it has a remarkably strong record. While we are always open to improvements to our government's screening process, we believe that our nation can continue to be both compassionate and secure.

We would ask that you reconsider these decisions, allowing for resettlement of refugees to resume immediately

so that our churches and ministries can continue to live out our faith in this way.

We are praying for you and for all of those in positions of civil authority, that God would continue to grant you wisdom and guidance.

Council for Christian Colleges and Universities