Protestors called The Alliance for the Preservation of Venice asks you to boycott SNAP Inc and Snapchat. 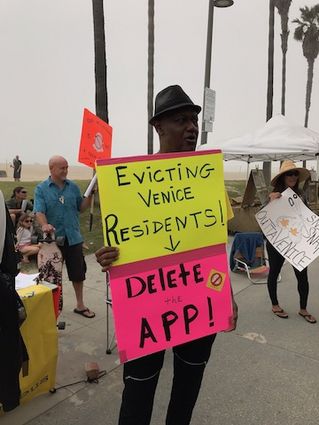 17 storefront properties deadened by Snapchat, which has occupied Venice to the detriment of longtime residents -- surfers, hippies and others.

America's latest tech billionaire Evan Spiegel grew up surfing in LA. Then he went to Stanford, where he met Reggie Brown and Bobby Murphy. Together, they designed a social media app that allows users to share images and videos, which will then vanish.

Snapchat has 30 million monthly active users, and Wall Street just rewarded Snap with an IPO that made them rich beyond their wildest dreams.

What exactly is wrong with Spiegel, Murphy and Brown living their American dream? We asked one of the longtime Venice residents holding a weekly protest in front of one of the 17 Venice beach storefronts occupied by SNAP Inc.

The problem is that like the Pilgrims, SNAP hasn't expanded into an empty continent, she explained. There were other people here first, many of them low or moderate income.

"17 storefront properties have been converted from colorful stores or homes, into cold office property. No one outside of SNAP Inc even knows what goes on inside them. Security guards now turn shoppers and locals like you and me, away from the entrances."

The argument is that Venice boardwalk, for 70 years an eclectic beach neighborhood unique to LA, has been deadened by Snapchat, which has occupied Venice shops and residences to the detriment of neighbors. Many of the longtime residents are not rich, and have seen their rents double and triple as Snap moved in and expanded.

"They won't be transparent with them about what their plans are with all these properties. It's one thing if it's artists and developers turning properties into lofts. But this is one company single handedly screwing up the community and forcing mom and pops and residents out of their homes and businesses," explained one protestor.

Protestors have formed a group and a Facebook page called The Alliance for the Preservation of Venice. https://www.facebook.com/groups/1348516685170456/ What exactly are the protestors asking people to do? 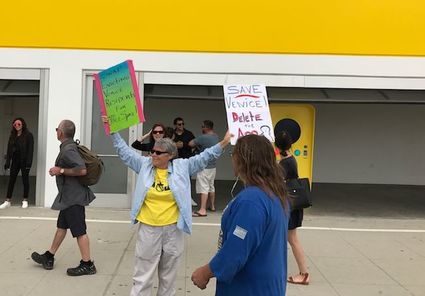 One of the principal concepts of Snapchat is that pictures and messages are only available for a short time before they become inaccessible. The prototype for Snapchat was started by Brown and Spiegel as a project for one of Spiegel's classes at Stanford, where Spiegel was a product design major.

Beginning as "Picaboo", the idea was to create a selfie app (application) which allowed users to share images that were explicitly short-lived and self-deleting.

"The temporary nature of the pictures would therefore encourage frivolity and emphasize a more natural flow of interaction." Snapchat also meant that you could send friends and acquaintances naked photos of your drunken ass dancing at raves, and for the first time not worry about future employers finding them. Truly, technology has allowed us all to live better lives.

Alliance for the Preservation of Venice Manifesto 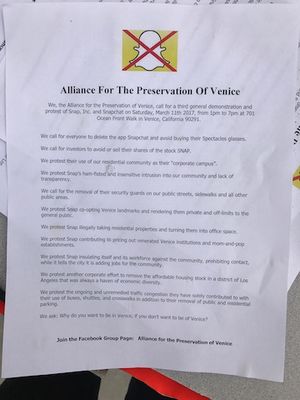 The Alliance for the Preservation of Venice calls on SNAP, Inc to stop converting homes and businesses into office space. They ask you to delete the Snapchat app, and also to not buy the company's stock, spectacles or other products.

Spiegel is a døuchebag, no question, but the real problem is (as usual) STUPID PEOPLE gobbling up Snapchat.