The moms arrived as employees of the fumigation company, US Superior, began to wrap the campus buildings in plastic tarps.

They broke a promise to not use these toxic substances at the school, said Sherry Martini, mother of a former Roosevelt student. They went directly to chemical measures without even trying to heat kill the termites, non invasive means that under District policy, should be used first, she said. Martini added that exterminators at the school refused to show her a license on request.

The mother of another child at Roosevelt, objected not only to the use of chemical spraying, but also to the notice to parents. She also felt notice to local residents, such as those living across the street from the school, was inadequate.

Some parents saw the spraying as part of the larger issue of toxins in Santa Monica Malibu Unified School District buildings."Levels of PCBs and Toxins in Malibu are high, and they care about it in Malibu. But nobody cares in Santa Monica," said Maggio.

Vikane is the trade name of poison being used today at Roosevelt Elementary school. Dow Chemical markets Sulfuryl fluoride as Vikane. It is widely used as a structural insecticide fumigant to treat termites and other pests. Inhalation is hazardous and potentially fatal to humans and animals. https://en.wikipedia.org/wiki/Sulfuryl_fluoride

Both sides tried not to escalate the polite conflict, and no one was arrested. ABF Inc in Downey has the subcontractors with the District. US Superior Extermination is doing the actual fumigation.

It appears that all buildings at the school will be tented. An employee of US Superior said the tents would remain for 3 days.Without a doubt, termites do a lot of damage to Southern California buildings. Termites mostly feed on dead plant material and cellulose, generally in the form of wood, leaf litter, soil, or animal dung. Termites are major detritivores, particularly in the subtropical and tropical regions, and their recycling of wood and plant matter is of considerable ecological importance.

Like ants and some bees and wasps, termites divide labour among castes consisting of sterile male and female "workers" and "soldiers". All colonies have fertile males called "kings" and one or more fertile females called "queens".

Termites are among the most successful groups of insects on Earth, colonizing most landmasses except for Antarctica. Their colonies range in size from a few hundred individuals to enormous societies with several million individuals. Termite queens have the longest lifespan of any insect in the world, with some queens reportedly living up to 30 to 50 years.

Unlike ants, which undergo a complete metamorphosis, each individual termite goes through an incomplete metamorphosis that proceeds through egg, nymph, and adult stages. Colonies are described as superorganisms because the termites form part of a self-regulating entity: the colony itself. 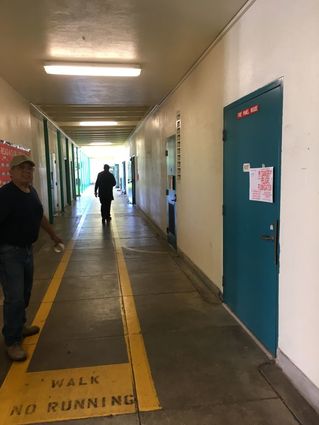 The moms arrived as employees of the fumigation company, US Superior, began to wrap the campus buildings in plastic tarps.