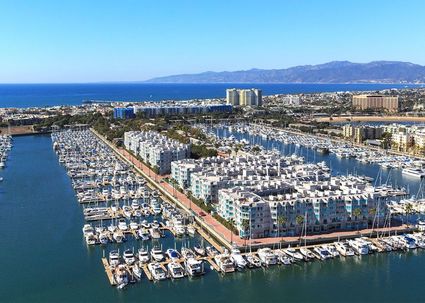 Marina Del Rey, one of many unincorporated areas directly controlled by County government

They have been called "the most powerful elected officials in the United States." Due to a County Charter left over from 1870, and the lack of political will among voters to expand the Board of Supervisors, just five County Supervisors control an LA County Budget exceeding $26.35 Billion, and represent, as best as possible, 10,000,000 residents of Los Angeles County.

Democratic Sen. Tony Mendoza, who lives in the small Los Angeles County city of Artesia, proposed the plan as an amendment to the California Constitution.

The amendment would require all counties with a population above 5 million in the 2020 Census to have supervisors representing no more than twice the population size of two congressional districts. In effect, this would increase the number of supervisors to 9 from five.

"It's hard for me to believe that elected representatives in counties outside LA, would welcome the specter of Angelenos removing their right to local self-determination," Kuehl said."Nor do I imagine that voters in Northern California should have the right to vote on a constitutional amendment to change the governance structure of a county hundreds of miles to the south."

In other words, Kuehl doesn't want her hard earned power diminished by mere elected officials in Sacramento. One of those is State Sen. Ben Allen, who is sponsoring the legislation. He said:

“The Los Angeles County Grand Jury did a comprehensive study of the county's governance structure and concluded the public would be well served by an expanded board of supervisors and an elected chief executive. I support the reforms proposed by the Grand Jury which are now reflected in SCA 12.”

There have been at least two attempts in the last 20 years to increase the Board of Supervisors' size by amending the County Charter. Voters turned down both measures, responding to a campaign that this would slightly increase the cost of the Board of Supervisors. A constitutional amendment such as this one, would require approval by two-thirds of the State legislature, and by a majority of California voters.

Los Angeles County, officially the County of Los Angeles, is the most populous county in the United States. Its population is larger than that of 42 individual U.S. states. It has 88 incorporated cities and many unincorporated areas and at 4,083 square miles, it is larger than the combined areas of the U.S. states of Delaware and Rhode Island. The county is home to more than one-quarter of California residents and is one of the most ethnically diverse counties in the U.S. Its county seat, the City of Los Angeles, is also its most populous city at about four million.

It is composed of the elected five-member Board of Supervisors, several other elected offices including the Sheriff, District Attorney, and Assessor, and numerous county departments and entities under the supervision of the Chief Executive Officer.

Some chartered cities such as Los Angeles and Inglewood provide municipal services such as police, libraries, parks and recreation, and zoning. Other cities arrange to have the County provide some or all of these services under contract. In addition, several entities of the government of California have jurisdiction coterminous with Los Angeles County, such as the Los Angeles Superior Court. 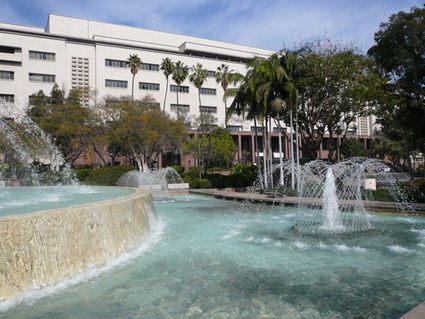 The Kenneth Hahn Hall of Administration where the Board of Supervisors meets.