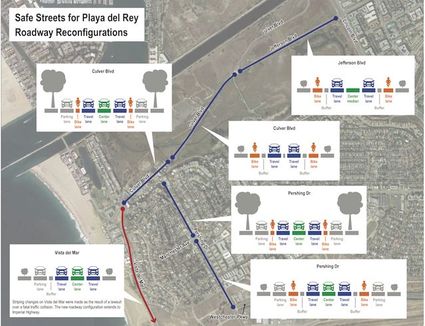 If you find yourself stuck in traffic on Lincoln Blvd as you drive to Los Angeles International Airport, there's a reason for it.

The City of Los Angeles has begun re-striping traffic lanes in Playa Vista, in an attempt at "traffic calming." This after several recent accidents in Playa Vista, including one that claimed the life of a 16 year old girl walking home from school. Needless to say, not everyone is calmed or pleased.

Culver Blvd along Ballona Creek to Pershing Drive or Del Rey has long been an alternate route to LAX. Now the traffic department has eliminated 9.4 miles of traffic lanes and added 4.3 miles of bike lanes.

The restriping was intended to cause fewer collisions and less traffic. It has led to bumper-to-bumper traffic, sending drive times and tempers soaring, reports the LA Times. http://www.latimes.com/local/lanow/la-me-ln-bike-lane-backlash-20170623-story.html

Opponents have drafted an online petition calling on City Councilman Mike Bonin to reverse the "one-lane madness," as well as a fundraising campaign for a formal appeal to the City Council - and a lawsuit to reverse the project, reports the Los Angeles Times.

"Everybody in Southern California wants to go as quickly as possible from Point A to Point B," Bonin said. "But by the same token, nobody wants people speeding through their neighborhood. Playa del Rey is also somebody's neighborhood."

"You may not have heard," says the online petition directed to Mike Bonin, "but the city is about to reduce Vista del Mar, Pershing, Jefferson and Culver to ONE lane each way.  Yes, that's correct, ONE lane each way.  They are calling this insanity "traffic calming".  We believe it will lead to road rage.https://www.change.org/p/councilman-mike-bonin-s-office-one-lane-madness-in-playa-del-rey

"Currently, Pershing and Culver back up at 7AM and again at 3:30 PM.  On Culver, the short stretch from Jefferson to Nicholson takes as much as 30 minutes.   Could anyone imagine that the City's "unique" solution to the traffic mess would be to remove lanes?

What's the City's plan for cars turning left onto Nicholson from Culver (already a bottleneck) once Culver becomes one lane?  Will the traffic back up to the Ballona Creek Bridge?  Will the 30 minute drive expand to 60 minutes during the rush hours? How will emergency vehicles move through jammed, single lane traffic?"

The re-stripping is the largest anti traffic measure in LA City history. The Traffic Department made the changes with little public consultation.

However, the conflict offers a vision of what is to come, as Los Angeles officials roll out dozens of similar projects over the next decade. Two sweeping initiatives - Vision Zero and Mobility Plan 2035 - call for reducing traffic deaths and improving transit and bike lanes across the city, changes that will frequently come at the expense of travel lanes on major roads.

Everyone wants to get home quickly. And no one wants to live on a major thoroughfare, with traffic whizzing by. The road ahead seems to lead through anger and finger waving. Perhaps by robots, as driverless cars become state of the art for driving.

Lincoln Blvd backups can't be blamed on traffic calming. I have a photo from a year ago of traffic stopped in both directions at 2pm I the afternoon on Lincoln Blvd. We have designed our streets around the automobile for a hundred years and all it gets us is more and more traffic. We have widened the streets, we have synchronized the lights, and traffic just gets worse. We need to create alternatives. We need to increase the gas tax, institute demand variable tolling on all lanes of the freeways, we need to make parking more scarce and more expensive, we need to take lanes away from the automobile and turn them over to mass transit so buses full of people aren't stuck behind single adults in their cars. It is laughable that people blame traffic on Lincoln on the new bike infrastructure. Taking back the lane away from cyclists is delaying the inevitable. Thinking it is a long term solution is absurd. If you really want to reduce traffic, increase tax, institute tolling, reduce parking

I just wanted to make a correction. The 16 yr old who was struck on Vista Del Mar was not walking home from school. It was after midnight and she was crossing an unlit road from the beach and not in a crosswalk. The city was told to install more lighted crossing and still to this day hasn't done so. Here are more details on Namoi's death http://www.latimes.com/local/lanow/la-me-ln-wrongful-death-settlement-20170419-story.html