Greencard Lottery is Known as the Diversity Immigrant Visa Program 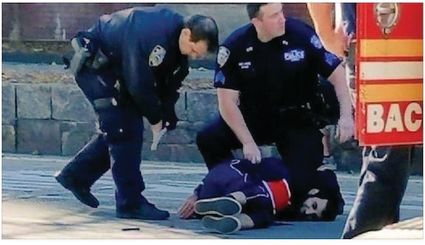 Sayfullo Saipov, 29, lying on the ground in NYC.

Update 2:President Donald Trump says that he will ask Congress to end the Diversity Visa Program, saying that Saipov should never have been allowed to use it to enter the United States.

Update: Ridesharing companies Uber confirms that the suspect in this case was an Uber driver. " he passed our background check. Nevertheless, he has now been banned from the app," says an Uber spokesman

Ann Coulter just tweeted: "Hey, I have an idea: How about a zero immigration quota for the Arab Middle East and Islamist-infested countries in Africa and Asia?"

However the latest terror suspect did not enter the US under a quota, but under a Clinton era Greencard Lottery called the "Diversity Immigrant Visa Program." The program permits 50,000 immigrants from countries under-represented in the US population, to enter the US each year.

NBC News reports that the Suspect in the New York City attack is Sayfullo Habibullaevic Saipov. He was born in February of 1988, and resided in Tampa Florida. He survived the attack which killed eight, when he plowed a rented truck into a Manhattan bicycle lane, not five blocks away from Ground Zero.

Sayfullo Habibullaevic Saipov is from Uzbekistan and has been in the US since 2010. He is 29 years old and a resident of Florida. He is believed to have self radicalized. He survived the attack, whose victims included injuries on a school bus. Saipov entered the US 7 years ago under the Diversity Visa Program. Meaning that he won the international lottery where the US hands out Green Cards abroad.

The format of his name includes the patronymic name Habibullaevic. Uzbek Islamic terrorists have carried out a war against the USSR and Russia for a good 20 years.

Sayfullo Saipov bonded out of Platte County, MO. North of Kansas City jail a year ago to date for failure to appear in court for traffic violation out of St. Charles, MO. ST LOUIS area.

The lottery is administered by the Department of State and conducted under the Immigration and Nationality Act (INA) as amended by the Immigration Act of 1990. The lottery makes available 50,000 permanent resident visas annually and aims to diversify the immigrant population in the United States, by selecting applicants from countries with low rates of immigration in the five years prior.

So the theory is "Diversity is good," "Diversity matters." Better Diversity than a bunch of immigrants from say, Germany and Ireland, who are already well represented in the US population.