Over-Hyped #HurricaneFlorence Not as Bad as Predicted. And that was Predictable.

How many times can they call wolf? Why the conspiracy to over play this storm? 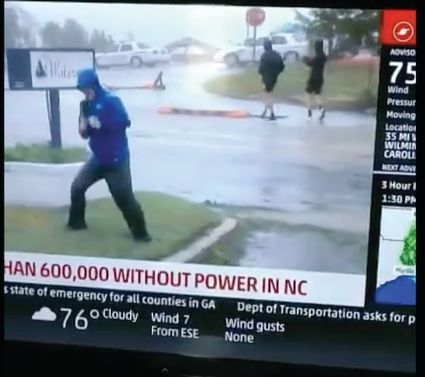 A video making the rounds on social media shows a newsman leaning into the storm, as if the 85 mile an hour winds were about to knock him over. Behind him, two pedestrians casually walk past him.

We were told once again, that it was the storm of the Century. 3 million people were evacuated, down highways whose direction police reversed, to aid the evacuation of entire Counties. Governors grimly warned "first responders will not come and get you. leave now." Comparisons were made with Hurricane Katrina which hit New Orleans in 2004, and Irma, which forever changed Puerto Rico in 2017.

But the truth was far more pedestrian . Yes, there was rain. And wind. And storm surge, and flooding. 14 people tragically died in allegedly storm related accidents, including an infant. Of course in a large enough group, there will always be deaths.

In contrast, New Orleans was completely inundated in the wake of Katrina; rescuers found almost 1000 bodies in the debris. Puerto Rico's power grid has still not been entirely repaired, one full year after Hurricane Irma.

Reports from the Carolina Coast do indicate some trees down. CBS News says "The historic town of Wilmington NC has been changed forever by the number of fallen trees." They're clearly grasping at straws.

A video making the rounds on social media shows a newsman leaning into the storm, as if the 85 mile an hour winds were about to knock him over. "So dramatic! Dude from the weather channel bracing for his life, as 2 dudes just stroll past. #HurricaneFlorence" tweeted Tony Scar. You can watch it on Jessica Tarlov's Twitter page. https://twitter.com/JessicaTarlov

How many times can they call wolf? Do those who evacuated, feel they were suckered into going? What will happen the next storm?

The Washington Post published an editorial blaming the storm on climate change and President Donald Trump. Now that the hurricane turned into a category 1 tropical storm before it made landfall, will they revise their opinion and issue a retraction? 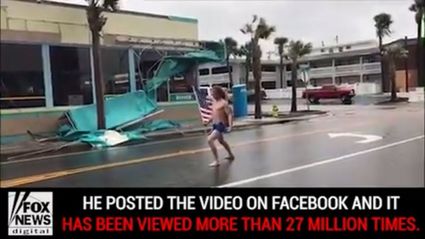 "With the threat of a major impact in the Southeastern and Mid-Atlantic United States becoming evident by September 7, the governors of North Carolina, South Carolina, Virginia, Georgia and Maryland and the mayor of Washington, D.C. declared a state of emergency. On September 10 and September 11, the states of North Carolina, South Carolina, and Virginia all issued mandatory evacuation orders for some of their coastal communities, as it is expected that emergency management personnel would be unable to reach people in those areas once the storm arrived." says Wikipedia. https://en.wikipedia.org/wiki/Hurricane_Florence

But by September 15th, today, the truth was far less devastating. The storm simply blew itself out as it made landfall. No newscaster or public official wants to open himself up to criticism that he was complacent in the face of tragedy. "You're doing a heck of a job, Brownie," as George W Bush said to the hapless head of FEMA in 2004. Who wants a moniker like that?

"Hurricane Florence is currently a weakening tropical cyclone that recently made landfall in North Carolina," says Wikipedia. Yes, it is. Anyone else ready to hype the next storm? Global warming, anyone? Truly, doth the Emperor have any clothes?

You sir, are very ill advised. We lived through this hurricane, and as much as you want to down play it as ,no big deal, this one was really bad. That’s what happens when a journalist, and I use that term loosely, sits in front of a computer and uses Wikipedia/ hurricanes as his main source of info. And there are always people who will make fake videos just to have a story. I would challenge you to come here, Havelock, NC, expierience the devestation first hand, and then write your trite fluff piece story. There is so much devistation here, roads washed out and gone, rail-roads with huge trees laying across them, hundreds of trees. Power line poles snapped in half by the hundreds, homes, cars, by the hundreds sitting in water, total lose. People losing their lives, and you downplay the number of lives lost like it is no big deal. But then again your view is exactly what I would exspect from a second rate newspaper in California. On my way to help those in need.

How can there be 30 inches of rain and in swansboro, NC? Check out this link to the New River Marine Corps Air Station, Camp Lejeune which is 23 miles from Swansboro on the coast. https://www.wunderground.com/calendar/us/nc/new-river-mcas/KNCA/date/2018-9?cm_ven=localwx_calendar I am showing about 6 inhes total and gust of 40 MPH plus. Is something wrong here?

I lived through Hazel in 1954 and Hugo in 1989. Survived the eyes. My sailboats near Belhaven have survived 4 hurricanes including Irene and Matthew.Now Florence, in the northern bands, with homes on the Pamlico Sound, my farm 2 hours inland from there and my wife's place in Raleigh. Yeah, Pollyanna, I overprepared this time, as I will continue to do. I much prefer the hype. So screw yourself, there in sunny California, sonny. You sound like you have not given this much thought.

It's evident that your knowledge of hydrology and meteorology is as sub-par as your writing and web development skills. The storm isn't over, the rain fall has already broken records, the rivers haven't crested yet, and you don't understand a word I'm saying. Evidently they're allowing mentally pedestrian chimpanzees access to the internet. Good for you. Stick around, son. Science doesn't require your belief.

If more people stayed, there would have been more injuries and deaths. This was handled perfectly by the news and by the weather officials. They properly warned the public. They worked with the best they have and they saved lives by getting people out. I encourage you to take a drive to NC’s hardest hit areas, help in clean up and then come back and report to us your thoughts on how this wasn’t handled properly. All indicators were that this was going to be a Teri le storm (as it was). If they didn’t sound the alarms and it stayed on track the way it was going, we would be talking about 1000’s of lives lost. Not 11 Yo should be thanking those forecasters and news agencies for the job they did and get a grasp on understanding the unpredictability of hurricanes. Your ignorant to all of this.

Hello, Why do you think mainstream media hyped this storm so much? I'm not even that interested in this topic but I noticed it got hyped as the storm of the decade. Is there a plan behind this? What is your opinion/speculation.