Homeless Man Dead Under Pier, a Baseball Bat to the Head. Was it connected to DTLA Murders? 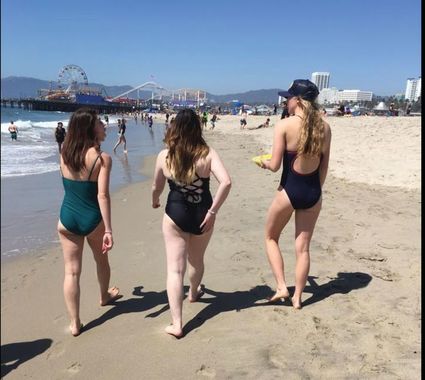 A dead homeless man was found underneath the Santa Monica Pier, a popular tourist attraction in Santa Monica

Thursday morning at about 6:40 a.m., SMPD responded to a radio call for service regarding a dead body discovered underneath the pier. Officers say he dead man, a white male in his 30's, "suffered an injury consistent with blunt force trauma to the head."

The Pier is the most popular tourist attraction in Santa Monica, and also the source of the most crime, statistically speaking.

The LA Times is reporting that the dead man was homeless. "This comes after three homeless men were viciously beaten while sleeping in downtown Los Angeles in the early morning hours Sunday. The suspect beat the men in the head and shoulders with a baseball bat, Los Angeles police said. The attacks occurred about 30 minutes apart. The victims were all left in critical condition." https://losangeles.cbslocal.com/2018/09/20/homeless-man-murdered-at-santa-monica-pier/

SMPD Detectives responded and are conducting a thorough investigation of the crime scene. Detectives are seeking information from anyone that may have been around the pier in the early morning hours and may be able to provide information related to this investigation.

Three homeless men were brutally beaten with a baseball bat while they slept on downtown Los Angeles streets early Sunday morning, and authorities were warning people in homeless encampments to be on alert for a possible predator.

The attacks left all three men in critical condition at a hospital. None had regained consciousness as of Monday afternoon, said Capt. Billy Hayes of the Los Angeles Police Department’s Robbery-Homicide Division.

In the first incident, the attacker, who is also believed to be homeless, smashed the bat across the head and shoulders of a homeless man in his late 50s who was sleeping near 5th and Flower streets around 4 a.m., said Hayes.

The assailant rummaged through the victims’ pockets after the attacks, which were believed to be motivated by robbery, Hayes said.

“Anytime that there’s a predator walking around preying on innocent people like this we want to get them as soon as possible,” Hayes said during a news conference at the LAPD’s headquarters Monday afternoon.

Police have no witnesses to the assaults, though portions of the attacks near Wilshire Boulevard and Flower Street were caught on surveillance cameras, Hayes said. The LAPD also made public a 35-second video clip showing the suspect walking around what appeared to be a building lobby.

Police declined to identify the victims. Hayes said the other men were in their mid-20s.

Hayes said it was too early to say if the men were specifically targeted because they were homeless, but investigators believe the man was looking to rob people who were isolated. Each victim was “sleeping in either alcoves or stairwells” near buildings, Hayes said.

Police are also reviewing older assault cases in the downtown and skid row areas where a baseball bat was used as a weapon, but had not linked Sunday’s attacks to any other crimes, Hayes said.

Investigators believe the suspect is homeless because surveillance footage showed him rummaging through dumpsters and trash cans while walking through the area, Hayes said. Detectives said a few people at area homeless encampments also recognized the man when they were shown fliers after the attacks.

The suspect was described as a white or Hispanic man in his 30s or 40s of medium height and medium build with dark black hair, Hayes said. He was last seen wearing a blue hat, gray sweatshirt, black shorts and bright white tennis shoes, police said. Hayes also said the man walked with a “distinctive gait,” possibly because he is bow-legged.

Members of the LAPD’s homeless outreach team as well as the RESET Unit, which serves skid row’s homeless population, have been visiting homeless encampments since Sunday to warn the community about the potential predator, Central Division Capt. Marc Reina said. An estimated 4,300 homeless people live in the skid row community, just a few blocks from where the attacks took place, according to a report released by the Los Angeles Homeless Services Authority earlier this year.

On Sunday morning, uniformed officers and detectives could be seen manning a crime scene near the Los Angeles Community College’s district offices on Wilshire Boulevard. Officers were roaming along Wilshire, stopping at local businesses to ask about surveillance footage.

Targeted attacks on homeless people in other cities have sparked panic in recent years. In February, 26-year-old Joshua Castellon was arrested and charged in a spate of targeted shootings that left two homeless victims dead and two others seriously injured in Las Vegas. In 2016, a man was arrested and charged with using a hammer and railroad spike to kill three homeless men in San Diego and critically injure two others.

“General” Jeff Page, a skid row community activist, said he was not aware of an uptick in violence against the homeless in the greater downtown area, but said the dangers of sleeping outside on any given night are obvious. 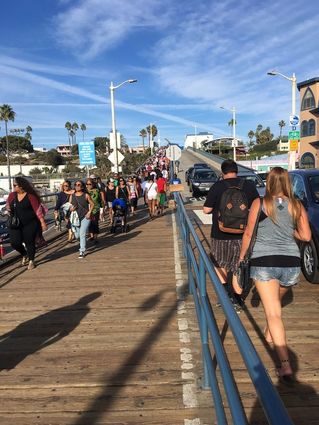 A dead homeless man was found underneath the Santa Monica Pier, a popular tourist attraction in Santa Monica

“It’s always a concern,” Page said. “So, that’s why homeless folks have what they call a buddy system so that they never are off by themselves.”

Page said he was surprised the LAPD had not contacted him about the attacks, as he believes the most effective way to communicate warnings to homeless men and women in the downtown area is through community leaders who conduct outreach.

“This is a teaching moment, moving forward,” he said. “If there’s a suspect on the loose, they need to create a database in terms of who to be notified.”