#KavanaughHearings: Did the Nominee Redeem Himself from a Credible Ford?

"I am 100% certain I was assaulted by Brett Kavanaugh" in 1982. Kavanaugh Accuser Christine Blasey Ford Testifies Before Senate Judiciary Committee 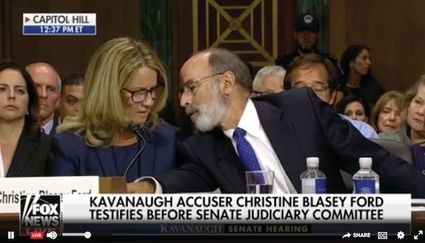 So he administered a polygraph on the day you attended your grandmothers funeral?"

Prosecutor Rachel Mitchell is scoring a lot of points on Christine Blasey Ford. Like the fact that she claimed she could not fly, but scuba dives all over the world—Tahiti, Hawaii. And ultimately flew to Washington. And contacted the Washington Post rather than Congress, her Congressman, the White House about her allegations.

Judge Napalitano on Fox: "In my mind, she's very credible and Ms. Mitchell is actually helping her credibility by the gentle nature of her questioning. Kavanaugh has to come off as more credible to save his nomination, and that's going to be difficult. This is not about the truth, it's about believability of the 2 witnesses. Ford is exceptionally credible, and Mitchell hasn't laid a glove on her"

She gets to question Ford for 5 minutes, then the Dems in turn, get to question Ford and try to rehabilitate her testimony. “Weren’t you in fact motivated by a sense of civic duty, and hoping to have some other nominee ultimately chosen, rather than trying to have a late stage impact on the decision.” “You bore this alone for a very short time. Could you help us understand how this impacted your life?"Blumenthal: For me, Boys will be boys is just too low a standard for men in our country. What is your reaction to boys will be boys

Ford: The younger you are the more impact this will have on you

It's common for survivors to remember some facts. Ut not others. Yes, I was definitely experiencing the fight or flight mode. But also some other lucky events that occurred.

I think asking the FBI investigate, having Mark Judge appear before us, was not asking too much.

Ms. Mitchell for Sen. Sass. "Did you talk about your exp. with any Republican member of congress?

No, I'm represented by a Democrat so no.

I appreciate that you did offer to come out to see me, I would have happily come to seen you, it wasn't. Car to me that that was the case.

Before July 30th, the date on your letter to Sen. Feinstein, had you retained counsel with regard to these allegations?

No, I didn't understand why I would need lawyers

A lot of people have that feeling. You asked Sen. Feinstein to maintain confidentiality until we have had further opportunity to speak, until Aug. 2nd, is that correct?

"I am available to speak further, I said because I was in Delaware, then

Did you talk to anybody about this letter before you sent it? Yes, Congresswoman's Eschews office. Why? Because they were willing to hand deliver it

Before you sent this letter, I had a phone call with Sen. Feinstein

How many times did you speak with Sen. Feinstein? Once. She asked me some questions about the incident, and I answered those questions.

Yes it was a fairly brief phone call

Did you ever give Sen. Feinstein or anyone else, permission to release that letter. 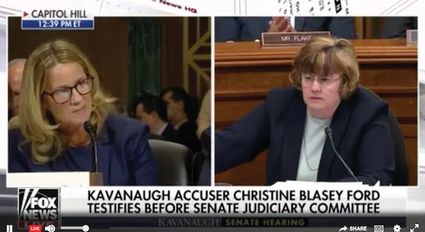 Correct, I was interviewing lawyers, but not speaking to anyone personally about the letter. I was staying with my parents. Did you talk to them about it? Definitely not

Was it during that period of July 31 to August 7th that you retained counsel?

Yes, I was trying to figure out how that whole system worked hiring lawyers? IT seemed that most of the individuals that I had told was not very high. I felt whether to push forward

Sen Blumenthal I want to join in thanking you for being here today. You have inspired victims of sexual assualt all over America, etc.

"I am 100% certain I was assaulted by Brett Kavanaugh" in 1982. Kavanaugh Accuser Christine Blasey Ford Testifies Before Senate Judiciary Committee