Over 90 children from 40 local schools included 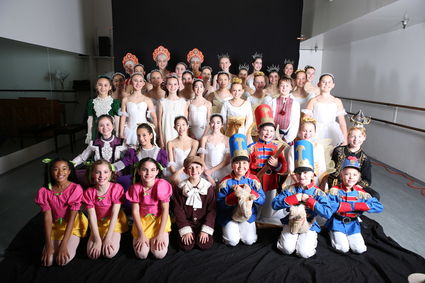 90 children from over 40 schools participated in Westside Ballet's 2018 Nutcracker. Ballet is one of the hardest sports in the world, uses every muscle in the body, and our advanced dancers train at the same level as an Olympian.

Among the few Nutcracker ballets performed with a live orchestra, Westside's production provides a perfect opportunity to introduce children to classical music and dance. The whole family can expect to be mesmerized by a colorful and elaborate presentation featuring world class professional dancers performing alongside pre-professional and student performers.

"Traditions are passed down through the generations. Whether it's a recipe from your great grandmother, or going to a special place on vacation each year, traditions that endure are the most coveted." says Martine Harley, Westside Ballet's Artistic Director.

"And so it is with Westside Ballet of Santa Monica's Nutcracker, as Los Angeles' longest running production with the classic version established by our founders, Yvonne Mounsey and Rosemary Valaire in 1973. Westside Ballet's Nutcracker has withstood the test of time and become one of the coveted traditions for our audiences and our dancers. Audiences return each year to appreciate the production they've loved for so long. Dancers who've grown up performing in this production now have their own children performing in it, or bring their family to enjoy it."

The familiarity of the beautiful Tchaikovsky score, brought to life by the Santa Monica College Symphony Orchestra, evokes special memories even before the curtain rises. The production itself, freshened over the years with new scenery and costumes, retains its most beloved scenes and characters-the tree that grows, a firing cannon, and falling snow over a stunning corps de ballet of ballerinas. Endearing children's roles include party children, mice, and soldiers.

"For the dancers, each year brings the promise of more advanced roles as they grow. A child that was a mouse in the battle scene not long ago, is now being fitted in the silk fabric of the Dew Drop Fairy," continues Harley.

As the Westside Ballet school's Boys Program continues to thrive, this year more young boys are dancing in the Nutcracker than ever before. Inspired by Zane Jesswein, who began at Westside at age 4, the youngest boys now look up to Zane, who has been a scholarship student at American Ballet Theater the past two summers, and has danced each role in this Nutcracker from Fritz to the King Mouse, to now the Soldier Doll and the dynamic Spanish pas de deux.

"Traditions endure through time, to grow ever more special through the years," continues Harley. "The dancers evolve and take on the classic roles with fresh interpretations that emerge through their individual talents, whether the comedic Maid in the Party Scene, or the shimmering Sugar Plum Fairy. The curtain rises in celebration of these traditions Thanksgiving weekend at The Broad Stage in Santa Monica."

Young Clara receives a nutcracker from her godfather, the wizardly toymaker Drosselmeyer, at her parents' Victorian Christmas party. Later that night, Clara sneaks downstairs to see her cherished new toy-and finds herself in the middle of a battle between toy soldiers and an army of mice. After saving the Nutcracker with a shoe toss to the Mouse King's head, Clara and her now-living prince are transported to The Land of Snow and The Kingdom of Sweets where Tchaikovsky's dazzling imagination propels forth dances of whimsical flowers and majestic fairy queens.

New to the ensemble is Principal Guest Artist, Daniel Wagner. A native of Los Angeles, California, Mr. Wagner began his dance training under Craig Williams at Pasadena Civic Ballet, attending summer intensives at ABT and the Kirov Academy before graduating high school at the University of North Carolina School of the Arts. Mr. Wagner received his pre-professional training with Houston Ballet under Claudio Muñoz and Andrew Murphy before launching his professional career with the Cincinnati Ballet. With Cincinnati Ballet, he danced principal roles in Balanchine's Serenade, Val Caniparoli's Lady of the Camellias, Annabelle Lopez Ochoa's Eros Redux, Penny Saunders' Nannerl, and Ohad Naharin's Minus 16. Mr. Wagner is currently a free-lance principal artist. "The company is very pleased to have Daniel debut as a guest artist with Westside Ballet this season," says Harley.

Two of Westside's most seasoned resident dancers will alternate this year as Sugar Plum Fairy.

Mirabelle Weinbach-Pacific Palisades resident and junior at Brentwood School-returns for her second season in the coveted role. Having danced with Westside ballet for nine years, she also received training in selective summer programs such as the New York's School of American Ballet, Boston Ballet School, and Pacific Northwest Ballet School in Seattle. Ms. Weinbach will will also dance the beautiful Snow Queen pas de deux in several performances.

Renée Spaltenstein began her training at age four under the direction and mentorship of Doris Catana Beriozoff, at Ballet School for the Opera House in Zurich. She performed with that school and with Zurich Ballet as a child before relocating to the United States in 2014. Ms. Spaltenstein joined Westside Ballet in 2017 after training with Yuri Grigoriev and has been featured in both The Nutcracker and Spring Showcase. She makes her debut as the Sugar Plum Fairy this season. Ms. Spaltenstein will will also alternate the role as Snow Queen in several performances.

Marius Chiang-Popa is taking on the role of the hero Nutcracker who crosses swords with the Mouse King to save Clara. Marius (14), an 8th grader at Park Century Middle School in Culver City, has been dancing at Westside since age 6, 2010, when he accompanied his mother, Mimi Chiang, who danced at the Academy for over 30 years. Marius' "opponent" is performed by Stefan Goy as the Mouse King. Stefan, a junior at Palisades Charter High School, is appearing in his 4th Nutcracker. He'll also be wowing the crowd with his Ukrainian Folk dance version of the Russian solo during the Educational Outreach Nutcracker Suite performances. Together, with Guest Principal Johnny Zhong, who dances the part in the public performances, they have been adapting the role for Stefan into this energetic and entertaining style. Stefan began studying ballet at Westside at age 12, and attends yearly Ukrainian dance workshops at the Roma Pryma Bohachevsky Dance Academy in New York City in the summers.

Since its inception, Westside Ballet of Santa Monica has offered affordable performances and donated thousands of tickets to deserving community organizations. Following in this tradition, Westside will open its doors to its Friday, November 30th preview performance to local Veterans and members of many charities and organizations such as: Westside Children's Center, Neighborhood Youth Association, Taking the Reins, Boys and Girls Clubs of Hollywood and Santa Monica, Everybody Dance, Venice Family Clinic, Santa Monica Police Activities League, A Place called Home, Community Corp of Santa Monica, Virginia Avenue Park, PAL, and more.

For the fourth consecutive year, approximately one thousand elementary grade students in the Santa Monica-Malibu and Los Angeles Unified School Districts will be treated to private, abbreviated, presentations of The Nutcracker held on Wednesday, November 28, and Friday, November 30th. Children will hear a narrated version of The Nutcracker story and see excerpts from the ballet followed by Q&A with the dancers.

The company provides the promising young dancers of the Westside School of Ballet the performance opportunities that are so vital to their growth - and makes dance more accessible to local children and families. Based in Santa Monica, California, Westside Ballet of Santa Monica comprises approximately 100 dancers, ages 8 to 18. 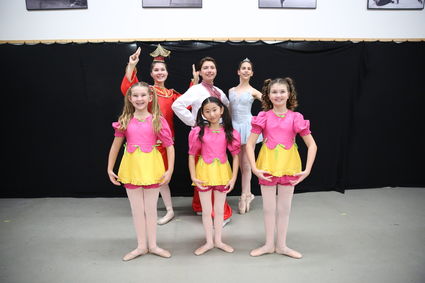 Maya Zeevi, a sophomore at Culver City High, an advanced dancer, soloed in the Snow Queen and Dew Drop Fairy. Also pictured is Marius Chiang-Popa who is in 8th grade at Park Century School in Culver City and is the Mouse King