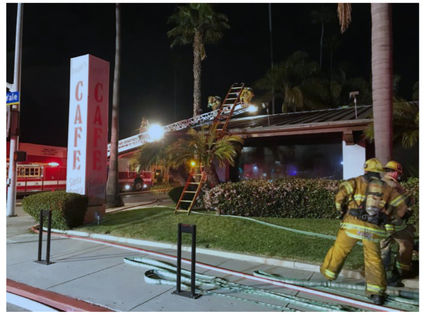 On Thursday evening, April 4th, 2019 at approximately 9:09 p.m. the Santa Monica Fire Department received a 9-1-1 call reporting a structure fire at the Coogies Café located at 2906 Santa Monica Blvd. The restaurant had just closed for the night when staff members discovered the fire, and immediately evacuated. Firefighters arrived in 4 minutes and were confronted with heavy amounts of fire which was spreading rapidly throughout the rear portion of the restaurant and to the exterior vegitation.

28 Firefighters aggressively battled the flames inside the building while conducting search and rescue operations. It took 18 minutes for the fire to be brought under control which was kept from spreading and damaging surrounding structures. Fortunately, there were no injuries reported to occupants or first responders. Santa Monica Fire Department Investigators remained on scene throughout the night and the cause is still under investigation. Santa Monica Police assisted with traffic and perimeter control.