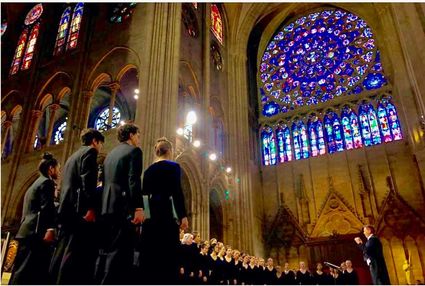 4/15/2019: santa monica high school Choir performed at Notre Dame de Paris on Friday April 12, 2019, just 60 hours before a great fire that heavily damaged the cathedral. They may have been the last musical group to perform at the 870 year old cathedral, prior to the fire.

“Santa Monica High School’s advanced choirs returned today from a concert tour of France, and were shocked to hear about the fire in Notre Dame,” reads the SamoHI Facebook page.

“We will always remember the warm welcome we received during our recent concert performance at the cathedral,” Choral Director Jeffe Huls wrote. “Our student performers mourn with the citizens of Paris at the devastation of such a historical landmark. We were deeply saddened by the news we first heard as our flight touched down at LAX.”

The Notre-Dame de Paris fire broke out in the roof of Notre-Dame Cathedral on 15 April 2019, shortly before 6 pm Paris time, causing severe damage to the building. The fire was extinguished 15 hours later, but fire crews remained to identify and extinguish residual fires.

The cathedral's wood-and-lead spire and roof collapsed, and considerable damage was caused to the interior, upper walls, and windows, as well as to numerous works of art. The stone vaulted ceiling beneath the roof prevented most of the fire from spreading to the interior of the cathedral, saving the building from worse damage. Cathedral staff are working to assess damage to its interior features and religious artifacts.

President Emmanuel Macron promised the country would restore the cathedral and launched a fundraising campaign which brought in pledges of €800 million from several benefactors within 24 hours of the fire. It has been estimated the restoration work could last up to twenty years, though Macron publicly vowed that the work would be completed in five. 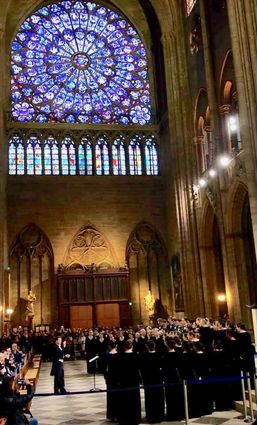 30,000 visitors a day see the iconic church, making it the most visited tourist attraction in Europe.