Fires started during renovations of historic buildings can smolder for hours unseen before breaking out. 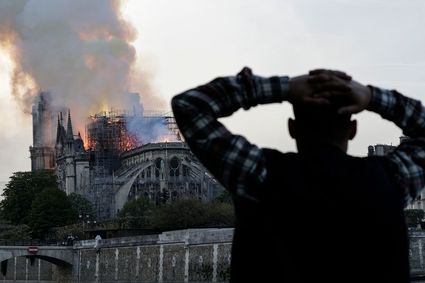 A fire linked to renovation work of the 870 year old Catholic cathedral, broke out after a welder applied a blowtorch to lead paneling sitting on dry wood. "Repairs to the lead roof required welding lead sheets which rested on dry, well-seasoned timber, much of it porous or powdery with age. This is a particularly risky process for historic buildings." Wikipedia, quoting Le Perisien

"Renovation works often cause fires, and it is suspected that the Notre-Dame fire may have been caused by such work, which required blowtorch use." Again, Wikipedia, quoting The New Yorker 4/15/19. https://en.wikipedia.org/wiki/Notre-Dame_de_Paris_fire

Conspiracy theories locally were that the fire was set by a terrorist, coming as it does the day after Palm Sunday. But church desecration seemed unlikely, given that the fire broke out in a construction zone. Last month, a 17th Century era church was burned down in Paris.

People were crying in the streets, as they watched the spire fall over and collapse. Workers are attempting to save the art, and this explains perhaps why there were no firehoses 2 hours after the fire began.

A police source reported that they were looking into the possibility that lead welding set fire to the roof trusses, as in similar fires. Le Bras Frères, the firm that was carrying out the renovations, said it had followed procedure and would co-operate fully with the investigation. It said none of its personnel were on-site when the fire broke out.

In general, fires started during renovations of historic buildings can smolder for hours unseen before breaking out. On 16 April, the Paris prosecutor said that nothing his office had learned suggested a deliberate act.

As Paris Mayor asked people to stay away, crowds instead gathered to watch the fire. France 24 reported at 714 pm local time, the entire roof has just collapsed.

The fire began at 9:00 AM PST, about 6:00 pm Paris time. The treasures of France, including a sprig from the crown of thorns Christ wore.

An AP reporter at the scene of Monday's fire says the roof at the back of the cathedral, behind the nave, is in flames and yellow-brown smoke and ash fill the sky.

Hidalgo urged residents of the French capital to stay away from the security perimeter around the Gothic-style church. The mayor says city officials are in touch with Roman Catholic diocese in Paris. 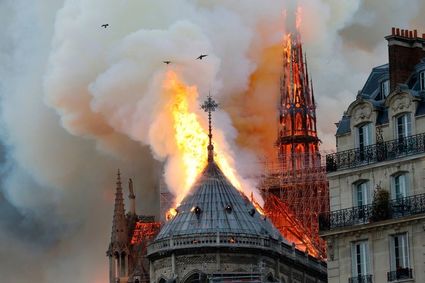 Flames rose above the building, as fire took down the church spire.

Tweet: " What you are seeing on television is one dark day. This is what Notre-Dame de Paris has looked like for nearly 800 years and will so for another 800. Do not lose courage over momentary loss; cry, yes, but cry knowing that this will pass. "

The New York Times posted an opinion that a welder had misused a torch:

Glenn Corbett, an associate professor of fire science at John Jay College in New York, said construction work and renovations had long been a dangerous combination.

“There’s a history of churches and synagogues and other houses of worship falling victim to construction fires,” he said, adding that one of the reasons for the peril was the proximity of open flames on torches, sparks from welders and other hazards on scaffolding to other flammable materials.https://www.nytimes.com/2019/04/15/world/europe/notre-dame-fire.html

Also, the Paris fire department seem to have been very well-prepared.

Wikipedia cites those sources; it does not quote them. Also, an electrical fault now seems more likely than a torch fire, as there was no welding done on the roof that day.