As noted in the City's press release by Constance Farrell, most of the money goes to other projects that have a positive impact on other priorities. 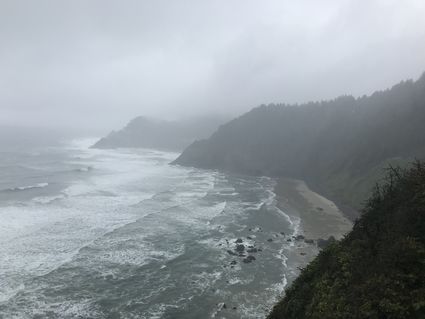 The Oregon Coast, one of many biomes threatened by climate change.

Editor: This is intended as a response to your article about the City's recent resolution on climate change and its commitment to spend up to $800 million to combat it.

As noted in the City's press release by Constance Farrell, most of the money goes to other projects that have a positive impact on other priorities.

The largest share of spending is to wean Santa Monica off of imported water through a combination of expanded water treatment, storm water capture and storage, conservation and local pumping.

This will protect our residents and businesses from future supply restrictions and price rises.  It also eliminates the huge energy usage to pump that water from the Colorado or the Sierras.

Similarly, investing in Zero Waste not only reduces our carbon footprint from trucking garbage to landfills, but also substitutes local composting and other strategies that would otherwise be spent on landfill costs.

All this is spelled out in greater detail in the staff report and the plan itself.  Also the Lookout managed to actually monitor the Council discussion and noted that we aren't promising that we can or will spend $800 million, but rather if we want to cut greenhouse gas emissions in our city by 80% by 2030 which worldwide scientific consensus suggests is necessary, that's our best estimate of what it would cost to fully implement the plan.

We hope to marshal those resources, but as the report notes, only with grant assistance from other levels of government and other sources of funding than the existing City budget.

No one has the illusion that Santa Monica can reduce climate change on our own.  The plan is predicated on the idea that it is a model that we hope and expect other cities, states and nations will also be pursuing (which in fact many are.)

If a large portion of the world's population lives in places that make similar efforts, the cumulative impact will indeed be significant, perhaps decisive.

Link to the referenced article: https://www.smobserved.com/story/2019/05/31/politics/santa-monica-city-council-decides-to-spend-800-million-to-combat-global-warming-locally/3993.html