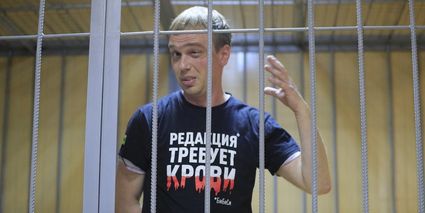 Ivan Golunov during a court hearing in Moscow on Saturday, wearing a T-shirt that reads- "Editorial desk demands blood"

Moscow (dpa) - Russian journalist Ivan Golunov has vowed to continue his investigative pieces after being released from detention.

Dozens of people turned out to greet Golunov, 36, in Moscow after his release Tuesday. He vowed to continue with his work as usual.

Earlier, Interior Minister Vladimir Kolokoltsev announced that Golunov would go free because of the "unprovability" of the drug charge against him. Kolokoltsev also criticized the Moscow police case that has prompted a widespread outcry.

His supporters say the case against him was fabricated. Senior members of the federal government, including the speaker of the upper house of parliament and the Kremlin spokesman, also questioned the case's validity.

In comments carried by state media, Kolokoltsev said the drug charge against Golunov is being dropped.

Kolokoltsev said he would petition President Vladimir Putin to have two Moscow city police department heads fired. He said federal authorities were to independently assess whether the city police actions had been legal.

In an apparent suggestion that the case could have been linked to Golunov's work, Kolokoltsev said: "I believe that independent of professional affiliation, every citizen's rights should be protected."

Moscow city authorities had alleged that Golunov was found in possession of the synthetic stimulant mephedrone, commonly known as bath salts. He faced a charge punishable by two decades in prison.

As news came out about the arrest, three of Russia's most popular newspapers - Vedomosti, Kommersant and RBC - united in support of the journalist.

The newspapers each published in large type on their Monday morning cover pages the phrase "I am/We are Ivan Golunov," accompanied by editorials calling for inquiries into the case.

"Golunov was examined by an ambulance team that determined he had a concussion, a haematoma and potentially broken ribs," it said. 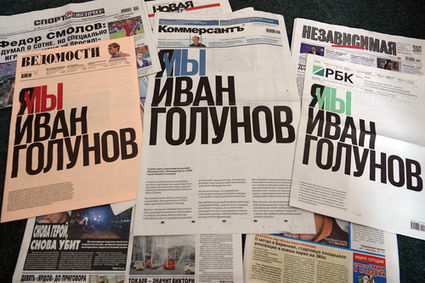 The speaker of Russia's upper house of parliament, Valentina Matviyenko, denounced authorities' actions in the case as "reckless" during a parliamentary session.

She promised that the case would be personally overseen by Russia's top prosecutor, Prosecutor General Yury Chaika.

The drug case was reminiscent of that against Russian human rights activist Oyub Titiev, detained last year during a traffic stop and convicted of marijuana possession. His supporters also say he was framed.

A court ruled this week to release 61-year-old Titiev on parole.