Esther Williams: The Swimming Queen of the Silver Screen will be on view in the Catalina Island Museum's Artists' Plaza Gallery through March 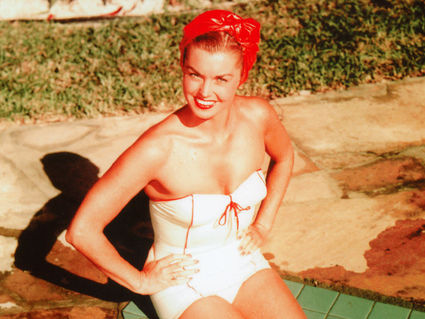 The Catalina Island Museum presents the National debut of Esther Williams: The Swimming Queen of the Silver Screen, an exhibition celebrating the dynamic life of the late Esther Williams opening September 6, 2019. The exhibition, chronicling Williams' dazzling life from athlete swimmer to movie stardom, includes a collection of more than 70 items compiled from private lenders and family members' personal collections.

For over 100 years, Catalina Island has been a coveted filmmaking spot including Esther Williams' aqua-musical films. One of the many things Catalina Island Museum prides itself on is exhibiting the stories of Hollywood on the island. More than half of the items from the collection will be on view to the public for the first time.

Of particular interest is the glamorous gown worn by Williams in Jupiter's Darling, on loan from the Fashion Institute of Design and Merchandising Museum (FIDM) of Los Angeles. In addition to costumes and personal video footage of Williams with her family, on display for the first time includes a personalized "Yes, I Still Swim" pillow gifted to Williams by journalist Barbara Walters. After Williams left the silver screen she was asked so often if she still swam it became a joke.

"Esther Williams was a woman of vim, vigor and undeniable talent. We are so proud to honor her legacy with our Swimming Queen of the Silver Screen exhibition," said Julie Perlin Lee, Executive Director of the Catalina Island Museum. "The exhibition allows audiences the opportunity to reconnect and learn about the iconic life of Esther Williams as a champion swimmer, a major box office star, a pioneer of synchronized swimming, an entrepreneur, and of course, about her connection to Catalina. "

This is the first exhibition focused exclusively on Williams and is intended to honor her and the great vision of MGM with their mesmerizing aqua musicals that "America's Mermaid" starred in.

Catalina Island Museum invites patrons to attend the opening reception on September 6 for a celebration worthy of a movie star. In conjunction with the museum's First Fridays at the Museum program, the official opening reception includes a fashion show launching the arrival of the Esther Williams Swimsuit Collection run by her daughter and son-in-law that can be found in the Catalina Island Museum Store throughout this exhibition.

Esther Williams: The Swimming Queen of the Silver Screen will be on view in the Catalina Island Museum's Artists' Plaza Gallery through March 8, 2020, and is accessible with general admission museum tickets. Tickets are $17 for adults, $15 for seniors (60+), students (with valid ID), and members of the military (active and veterans). Children 15 years old and younger receive free admission with a paid adult admission. Members of the museum receive free admission.