Tyler Skaggs Cause of Death: Fentanyl, Oxycodone, Booze, and Choking on his own Vomit

Everything Stan Greene said in the days immediately following his death, turns out to have been true (sadly) 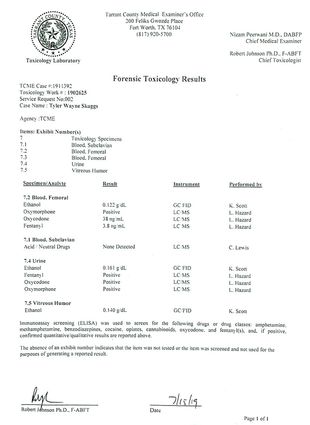 The Toxicology Report from Tyler Skaggs autopsy has been released. Sadly, everything I wrote in the days immediately following his death turn out to have been true.

A number of other newspapers called the Santa Monica Observer "Fake News". But remember, you heard it here first.

Now a few observations are in order:

2. Drug use is out of control among Major League players. They travel around to towns like Mobile Alabama and Decatur Illinois, they play a game. Then at night, there is nothing for them to do but drink or use drugs.

4. Law firms representing teams like the Angels, will send out fatuous threat letters to avoid our discussing drug use among the professional teams they represent. This is not helpful. Embedded below, left is a threat letter we received from #kirlandandellis after going live with our story. That, in combination with death threats from the kind of strange individuals who send death threats, caused us to pull the story, in a restriction of my First Amendment Rights.

5. Drug abuse is exactly what we should be discussing with kids, while we have their attention because they are thinking of the shocking death of a professional athlete they admired. The Angels and professional clubs may not want us discussing players as people with drug and alcohol problems. But the truth is the truth.

List of news sources who pilloried me after I got it right about Tyler Skaggs death on July 2:

This from the LA Times:

Angels pitcher Tyler Skaggs had the opioids fentanyl and oxycodone along with alcohol in his system when he was found dead in his Texas hotel room July 1, according to a toxicology report that will be released Friday by the Tarrant County medical examiner's office.

The cause of death is listed as a mixture of "alcohol, fentanyl and oxycodone intoxication with terminal aspiration of gastric contents," meaning Skaggs, 27, essentially choked on his vomit while under the influence. The death, according to the report, was ruled an accident. He was found on his bed, fully clothed, and there were no signs of trauma.

The Southlake, Texas., Police Department is investigating the death, and a statement from Skaggs' family issued Friday mentions that an Angels employee may have some involvement.

The statement: "We are heartbroken to learn that the passing of our beloved Tyler was the result of a combination of dangerous drugs and alcohol. That is completely out of character for someone who worked so hard to become a Major League baseball player and had a very promising future in the game he loved so much.

"We are grateful for the work of the detectives in the Southlake Police Department and their ongoing investigation into the circumstances surrounding Tyler's death. We were shocked to learn that it may involve an employee of the Los Angeles Angels. We will not rest until we learn the truth about how Tyler came into possession of these narcotics, including who supplied them. To that end, we have hired attorney Rusty Hardin to assist us."

The Angels were staying at a hotel in Southlake ahead of a three-game series against the Texas Rangers. The team arrived the evening of Sunday, June 30, and Skaggs' body was found in his room at approximately 2:18 p.m. the next day after he didn't report to the ballpark on time. 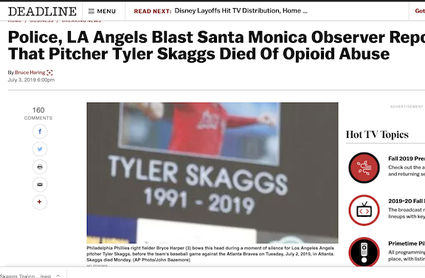 Example of how I was pilloried by the media

What authorities learned about Skaggs' hotel room is not publicly known because police reports have not been released. The L.A Times and other news outlets requested police, fire department and emergency medical services records related to the incident, but an attorney representing the c ity of Southlake asked the Texas attorney general whether many of the records are exempt from disclosure. No decision has been reached.

The Southlake attorney said in the letter to the state attorney general that release of some of the materials requested could "interfere with the detection, investigation or prosecution of crime."

Fentanyl is a powerful synthetic opioid similar to morphine but 50 to 100 times more potent on a weight-by-weight basis. When taken in uncontrolled concentrations by unsuspecting users, or by users whose opioid tolerance has not been heightened by long-term use, the drug is more likely even than prescription opioids to suppress respiration and cause death.

The apparent fact that an Angels employee was involved in supplying the drugs makes the Angel’s condemnation of the writer even more pathetic.