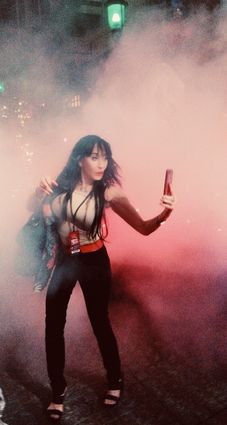 All guests, including myself were mesmerized, spellbound in a dynamic three dimensional world of fantasy and terror. Thursday September 12, 2019 from 7-1AM at Universal Studios, 100 Universal City Plaza, Universal City, CA 91606

I arrived at 745 PM and was scarily enticed to stay until the closing at 1 AM.

Even though the Universal Studios Park information pamphlet advises parents with "children under the age of 13" to reconsider visiting this event, I feel that two of the rides "The Simpsons RIDE" ,and "TRANSFORMERS THE RIDE-3D" could be enjoyed by children 5 years and older.

I showed my IPhone videos and photos to my savvy and smart 7 year old grandson Andrew, who really loved and appreciated the 3D motion simulated ride, with breathtaking flashes of bright lights, rocketing guns, sharp blades for the battle with the "Autobots" from the "TRANSFORMERS THE RIDE-3D" Andrew's favorite was their leader "Optimus Prime"

The ride "JURASSIC WORLD" This a FUN roller coaster ride with prehistoric dinosaurs and nasty creatures that opened their mouths and attempted to bit. All riders were splashed with water before there was an 80 foot drop down at the end of ride. I loved this!

REVENGE OF THEMUMMY –THE RIDE Authentic Egyptian hieroglyphics spell out dangerous warnings as the coaster twists and turns in the dark at 45 miles an hour. Fiery faces glare at with blazing torches all the way until the end. Spine –chilling, intimidating but fun.

THE SIMPSONS RIDE is a similar ride based on the animated television series. You smash though Krustyland with Homer, Margie and Bart. This virtual reality roller coaster rides action is realistic and enjoyable

A truly stalking experience from Frankenstein and Wolf Man in their relentless rage and pursuit for each other. Erie music and detailed props, a must see!

2 Ghostbusters was one of my favorite mazes, with a multitude of paranormal creatures including nasty Slimer, forceful Gozer the Gozerian and the amazing Stay Puft Marshmallow Man to fight the diabolic and haunting ghosts and apparitions.

This Sony Pictures classic 1984 film Ghostbuster had all guests step through the deftly transformed and recreated scenes, filled with spooky ghosts and demons.

3 Stranger Things was strange with an 80's soundtrack, as a blood thirsty and a plundering creature menaces the small town of Hawkins, Indiana with a parallel universe called the Upside Down.

4 Holidayaz in Hell This original maze created a scare zone from Thanksgiving to Christmas, New Year's

Eve to Valentine's Day, and from Easter to Fourth of July was a psychotic but creative twist on life's biggest holiday occasions. The visual effects were outstanding with playful dark humor.

5. Creepshow was influenced by the 1982 cult movie directed by George Romero but reinvented by producer and director Greg Nicotero. If you are afraid of crawling spiders and blood sucking leaches, then I suggest that you avoid this maze

6. Killer Klowns from Outer Space All guests are tempted by the smell of fresh cotton candy and ice cream to enter a circus tent filled with deranged and murderous klowns from outer space.

You will be hollering for help if you enter this three ring circus from cosmic space hell.

7 The Walking Dead Authentic make up effects and set designs recreates AMC's most watched television show in cable TV history. Not that scary or exciting.

8 The Curse of Pandora's Box Guests enter a decrepit and decayed outlandish old store front shop that is filled with numerous occultist relics and artefacts. You hear the provocative voice of a woman coaxing them to court disaster and open the opulent Pandora's Box. This was an enchanting experience not to be missed.

9 US A surrealistic adventure walking through mirrored forests and fully believable homes and emerging through countless tunnels, where guests emerge and are encouraged to murder their own "privileged clone" in a nationwide revolution. This maze was bewildering and baffling but extremely shocking and well done.

10. House of 1000 Corpses Dark cloudy rooms are filled with some of our countries most infamous serial killers that madly jump out at you with a sharp knives .or heavy axe, as you wonder through cavernous tunnels in the house where you have a one-on one meeting with the villainous Dr Satan. Super fun time!

I did not have enough time to explore the scares zones .maybe next time

This was a marvelous and phenomenal Halloween Horror Night at Universal Studios and I highly recommend everyone to buy their tickets asap. 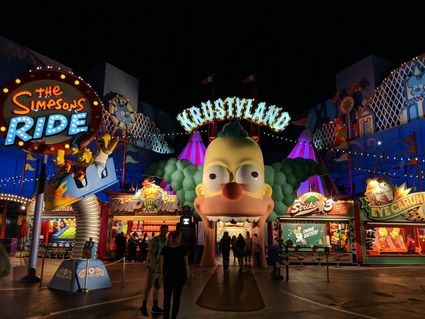 Event Hours: 7 PM- 1AM or 2 AM Visit http://www.HalloweenHorrorNights.com

Tickets can be purchased at Hollywood.HalloweenHorrorNights.com