Lincoln Blvd is already at capacity, but residents loss will be Neil Shekhter's gain 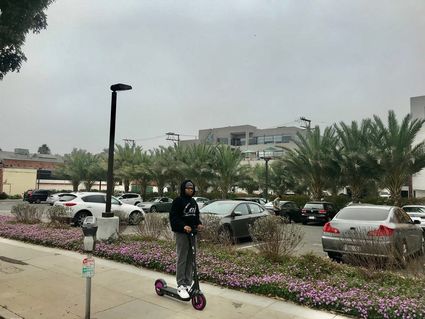 The canyon of construction that Lincoln Boulevard has become near the 10 Freeway onramp is going to receive a new addition to the mess this spring. The current surface parking lot between Santa Monica Boulevard and Broadway, once a block of one-story shops, will be demolished in turn to allow construction of a five-story mixed-use building at 1430 Lincoln Boulevard.

The developer of the building is WS Communities - isn't that a nice name? Sounds so friendly. But WS Communities is actually an affiliate of NMS Properties, a developer who is notorious for obtaining cushy developer agreements that allow them to build beyond the city's zoning requirements. In addition, NMS CEO Neil Shekhter has been the subject of a Racketeer Influenced and Corrupt Organizations Act charge.

The project at 1430 Lincoln Boulevard will have roughly 6,000 square feet of retail on the ground floor, 100 market-rate apartments, and a four-level underground parking garage with 296 spaces.

A considerable amount of jockeying had to be done to give this project a green light from the city, involving trading properties, moving and sharing parking spaces, and massaging affordable housing unit numbers.

The legal and political maneuvering began with the city's desire to build a new fire station downtown to replace the existing station on 7th Street. This fire station, built in 1955, was judged to be old and in poor condition. The problem was that the location the city wanted for the new station was on a private parking lot, also on 7th Street, owned by NMS.

A complicated arrangement was worked out between Santa Monica city officials and NMS. NMS would give the city the lot on 7th Street for their fire station (now under construction). In return, the city would cede to NMS two municipally-owned parcels on 5th Street. In addition, the city would allow NMS to do a complicated parking lot construction at 1430 Lincoln Blvd.

In the interim between the destruction of the lot on 7th Street and the beginning of construction at 1430 Lincoln, the lot at 1430 Lincoln was turned into a temporary surface parking lot. (You've seen it; it's the Cadillac of parking lots with full-size trees.) 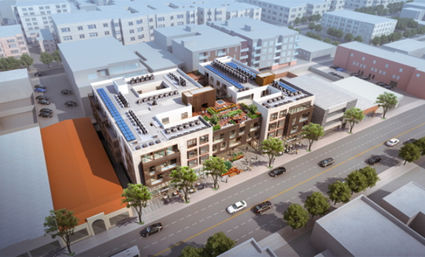 Artist concept of the neighborhood buster

Of course, this interim lot will be destroyed in the spring when WS Communities breaks ground for the mixed-use building. Do not be so naive as to think any of the additional parking spaces that will be part of the new building will be available to the public. Instead, 30 of the spaces will for the exclusive use of the City. 20 of them will be for building visitors. And probably all of them will cost an arm and a leg to use. We should be thankful the city is not waiving parking requirements as they are doing for other projects going up in the city.

WS Communities is fulfilling their obligation to include a certain percent of affordable units by constructing 30 affordable units offsite at a senior housing project at 711 Colorado Avenue. This arrangement also became complicated since the project at 711 Colorado is already constrained by a settlement agreement to provide certain specified affordability levels that don't exactly match what WS is obligated to provide. In addition, 711 Colorado is also being used to satisfy the affordable housing requirements for a development at 1325 6th Street. But they all worked it out. Trust me. And forget the fact that all this luxury housing is in effect building slums elsewhere. It's all good.

Your self professed fact that 90% of the homeless population are mentally ill IS bogus. https://www.latimes.com/local/la-me-mentally-ill-homeless-20170807-htmlstory.html You have no credibility.

The rise in crime in Santa Monica mirrors the rise in homelessness. That isn't my misguided opinion. That's a fact. https://www.smdp.com/serious-crime-in-santa-monica-rises-8-8-percent/172447

Great. Let's all see the proof you have that 90% of our homeless population is mentally ill. Show us your statistical proof. If you can. If not, that claim was bogus. The rise of homelessness in our city mirrors the rise in crime. Folks on skid row have always had bus access to our city. Ask the Santa Monica Historical Society if our city is overdeveloped. They will tell you it is not. I believe them. You seem to wish for days that are long gone and never coming back. People are going to continue to visit here and continue to move here and we need state of the art infrastructure to support them and us. We also need transitional housing to get our homeless population off the streets. Once sheltered in a supervised environment, their needs can be diagnosed by volunteer professionals and addressed. Until then, our city is not doing enough to address this serious problem and the situation is only getting worse by the day. Blaming everyone that rides the light rail is wrong.

I don't call direct care experience in working with and counseling the homeless bogus. I'd venture to say I have far more experience and better credentials to comment on the real causes of homelessness than you do. There is a very good reason why the Metro train has been nicknamed the Crime Train by many people in Santa Monica. It basically created a bee-line between Skid Row downtown and the beach. You think I'm kidding about the crime in Santa Monica increasing at the same time as the over-development craze? See the link below to a story on the FBI crime report that the Santa Monica Observer did last week. At least I've provided real evidence and real world experience. All you offered is a bunch of political memes, catch-phrases, and no facts. All symbolism and no substance. Santa Monica will see what expansion for its own sake will produce. https://www.smobserved.com/story/2019/11/01/news/a-2018-doj-report-says-that-violent-crime-was-up-in-santa-monica-2018-over-2017/4277.html

Throwing around bogus statistics about our homeless population, falsely slurring anyone that smartly rides the light rail, a thug, and wistfully longing for the good old days in the face of 21st century progress, like the Make America Great crowd, only further demonstrates the narrow-mindedness of the anti-development members of our community. Preserving the character of our neighborhood are just code words for outsiders aren't welcome here.

I agree with Ms. Eardley's view and appreciate her reporting on how the face and character of Santa Monica is rapidly changing--unfortunately not for the better. It breaks my heart to see what was once a quiet, low-rise, community-based beach town urbanized and city-fied in exchange for development deals and tax revenue. I believe Santa Monica is only eight square miles. This rapid push to increase population density is going to backfire spectacularly. All the low-income housing and thugs that ride the Metro train have already made Santa Monica, based on a new FBI report, the third least safe city in CA on a per capita basis, right behind San Francisco and Oakland. If you'd worked in a day center for the homeless, as I have, you'd know that 90% of them are homeless because they struggle with mental illness. They couldn't take care of a home because they can't take care of themselves! Homes aren't the solution to homelessness; it's full-time, residential, institutionalized care.

5 stories isn't a tower. Not even close. The more downtown hotels and residents - less downtown traffic- more walking. Anyone that knows anything about city planning, knows this. Your constant hysterical anti-development articles lack credibility. You also rant against the new development at Arizona and 5th Street. You want another downtown park. Spend ANY afternoon at Reed Park and then tell me again how we need another downtown park. The drug using homeless population has made that park unusable for local residents. Until we address housing our homeless we don't need anymore parks that turn into crime ridden homeless shelters on public park land.