She had been bound, sexually assaulted and died from asphyxia because a tissue was stuffed down her throat 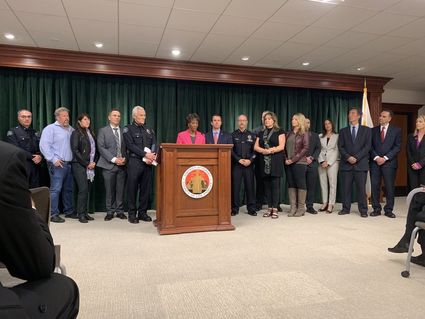 It marks the first time in Los Angeles County that a criminal case has been filed using the innovative forensic tool.

"Thanks to advances in technology and forensics, we are now able to virtually reach back in time and find those responsible for these vicious crimes," District Attorney Lacey said.

Horace Van Vaultz, Jr. (dob 5/21/55) was charged today in case BA482647 with two counts of murder with the special circumstance allegations of multiple murders and that the crimes were committed during a rape and sodomy as well as lying in wait for each victim.

He is expected to be arraigned on Monday in Department 30 of the Foltz Criminal Justice Center.

Vaultz is accused of killing 22-year-old Mary Duggan on June 9, 1986. Her body was found in the trunk of her car in an empty Burbank parking lot. She had been bound, sexually assaulted and died from asphyxia because a tissue was stuffed down her throat.

The defendant also is charged with murdering Selena Keough on July 16, 1981, in San Bernardino County. The 20-year-old mother was found under some bushes on a street in Montclair. She also had been bound, sexually assaulted and strangled.

The defendant faces the death penalty or life in prison without the possibility of parole if convicted as charged. A decision on whether to seek capital punishment will be made at a later date.

Police investigating the crimes have reached out to other law enforcement agencies to determine if the defendant is responsible for other unsolved murders in California.

The case is being prosecuted by Deputy District Attorney Beth Silverman of the Major Crimes Division's Cold Case Unit.

"With dedicated resources and rapidly advancing technology, we can unmask the cowardly murderers who have remained hidden in our community and bring justice to the grief-stricken families who have waited too long for answers," District Attorney Lacey said.

The case remains under investigation by the Burbank and Montclair police departments. The FBI's Forensic Genetic Genealogy Team also assisted in the investigation.

If you have any information regarding these cases or the defendant, please contact the Burbank Police Department via a designated tip line at (818) 238-3086.