"What Would You Say to Americans Who Are Scared?" Draws Angry Response from US President

"We're trying to give American's Hope and You Work for Concast, not Comcast," says Trump 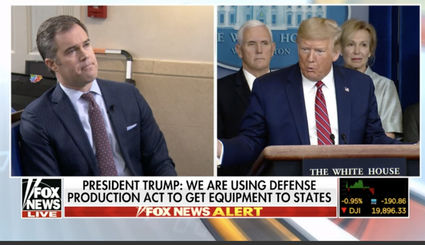 Trump: "I say you are a terrible reporter, that's what I say."

I just spoke to Sen. Schumer, we had an incredible conversation. I'm looking at people who weren't speaking, and we're going to go back to the kind of economy that we had, maybe even better." Trump

He said a big focus would be small businesses. "They are really the engine behind our country."

He's not aware of senators doing insider trading. Dianne Feinstein and others, I find them all to be very honorable people.

"I know they're just making it up. This is a time to come together, which is much harder when we have dishonest journalists.

"I have a very good relationship with Pres. Xi. I respect China and I respect Pres. Xi," Trump told a Chinese reporter in response to question of why there are still travel restrictions from China (she didn't say it, but the rate of infection in Wuhan and in Hubei province is way down).

We're not sending people back to Mexico, but to their country of others.--Trump

Disinformation is from lots of countries, American people should go to trusted sources for their information. -- Sec. of State Mike Pompeo.

US President also called the State Dept. the "Deep State Dept." a question which Pompeo also addressed. "I know he values the people who work for me," said Pres. Trump. Former Sec. of State Hillary Clinton appointed many of the important people in the State Dept, and the president is known to have a testy relationship with the State Dept.

What do you say to people that have the view that only 3.4% of the US Population might die, tens of thousands die from annual flu and traffic accidents. And we don't shut down our economy for that."

"We can bring our finances back very quickly, we can't bring people back. And we're doing what other countries are also doing." Pres. referred to Anthony Fauci

Carnival Cruises may allow us to borrow cruise ships as hospitals in NYC, LA, other cities. General Motors (GM) and other companies are making ventilators now. I won't name all the companies, but several. -- Trump

"I think that's a false equivalency, traffic accidents with this. When you have something new, and emerging, and you can't treat it. When you look at what's happening to Italy and NYC, you can't just say let's let it rip, let's let people die." Fauci said. 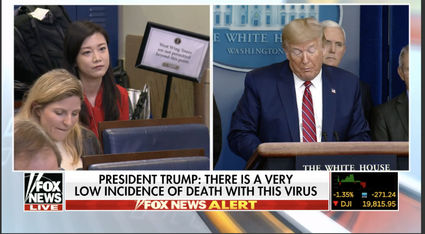 Pres. Trump evades question from a Chinese reporter, why there are still travel restrictions now.

"I love New York, I grew up there. Gov't and the governor get along with the Fed. gov't," said Trump.

On illegal entries, people who are OTM, how will returns work?"

It's a public health crisis, we're trying to limit contact we have with these people. Take them into custody and have as little contact with them as possible."

Trump: I want to get workers money, and give money to people who are out of work. We're talking about much more than one $1000 check. Once this enemy is defeated, (the economy) will all come back to us very quickly."

When we win the war with the invisible enemy, we're trying to make it so it will all come back.