Our photographer captured Trump supporters of all ages and races, ethnicities and religions in an enthusiastic crowd of 5000. 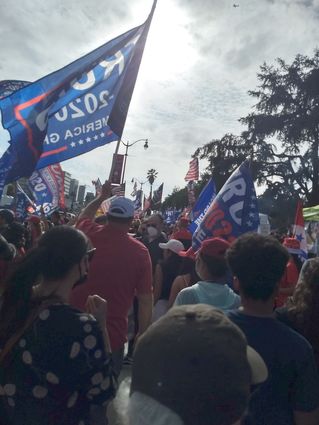 An enthusiastic crowd of about 5000 Trump supporters in Beverly Hills on Saturday, October 24th 2020.

U.S. President Donald J. Trump faces an uphill re-election battle. His improbable victory in 2016 and subsequent conservative governance, engaged many on the left against his re-election. The latest national polls show him down about 7%, but the polls proved to be very wrong in 2016. Voter enthusiasm is regarded as important in presidential politics.

If you live in California and drive on Santa Monica Blvd in Beverly Hills, perhaps you have noticed the weekly Saturday afternoon pro-Trump rallies in a Beverly Hills park. Our photographer photographed people of all races, ethnicities and religions in the growing crowd. This is the Covid-19 era, so some wore masks, but few socially distanced.

It's no secret that supporting Trump can get a person cancelled from parties, perks and employment in progressive California. One woman who asked that we anonymize her name, wrote the following comments:

I have been there since the beginning of the rallies that started about 10 weeks ago with only 30-40 people. 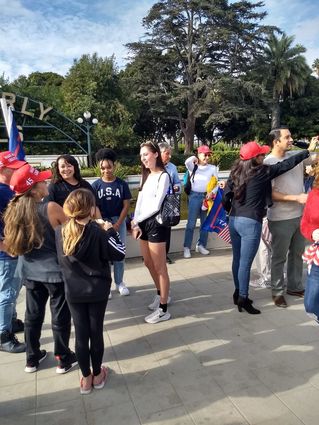 Trump supporters in Beverly Hills included the young and old, women and men, Jews and Christians, Black and white folks.

Today I would estimate there were between at least 3,500, possible as many as 5,000 pro-Trump fans in the park in front of the Beverly Hills sign. There were old and young, black and white and all other colors, rich and poor from every country and every part of the Los Angeles area.

2 blocks on both sides of the street shouting out their support for Trump. There was no room to walk on the sidewalk, no room to stand near the street.... People of all ages and backgrounds carrying huge and tiny flags and signs, all smiling and cheering "4 more years"

I have attended many rallies and protests in my life.... But none like this...it was spectacular. It started around 2pm and was still going at 8pm including a march down Rodeo Drive and a dance festival.

Submitted by an Anonymous Trump supporter in order to stay safe in Soviet Monica.

I was also there. The atmosphere was festive with all the cars driving past with their American flags and Trump signs. It was all happiness and cheer! Not like the riots one is seeing.