Monoliths on Phobos, Mars and the Utah Desert, May All Be Related Structures 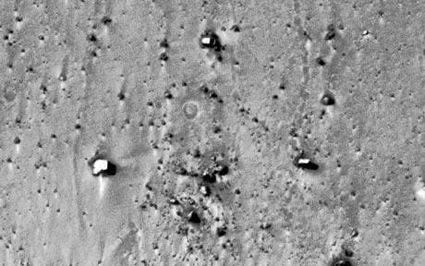 NASA Photos show that the Monolith in Utah's Red Rock Desert may have visited the Red Planet just 4 years ago.

Apparently the silver Monolith discovered in Utah's Red Rock desert is part of a family of monoliths, distributed throughout our Solar System by another civilization for some unknown purpose. Either that or it's moving around through our solar system, phasing into different locations at different times.

The monolith (or monoliths), has previously been sighted by Nasa's Mars Reconnaissance Orbiter on Mars and one of its moons, Phobos.

This of course calls to mind the 2001: A Space Odyssey, where a black monolith is found buried on the moon. Then an astronaut named Dave travels to Jupiter, only to find a black monolith in orbit for thousands of years.

The Phobos monolith was a large pillar located on the surface of Mars's moon Phobos. It measured about 279 ft across and 300 feet in height--significantly bigger than the Utah Monolith.

The Mars monolith is a bright object near Stickney crater, described as a "building sized" boulder, which casts a prominent shadow. It was discovered by Efrain Palermo, who did extensive surveys of Martian probe imagery, and later confirmed by Lan Fleming, an imaging sub-contractor at NASA Johnson Space Center.

"A monolith is a geological feature consisting of a single massive piece of rock. Monoliths also occur naturally on Earth, but it has been suggested that the Phobos monolith may be a piece of impact ejecta," claims Wikipedia. But we know better. 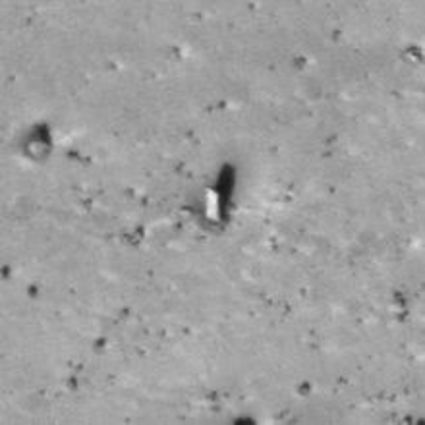 The general vicinity of Phobos' monolith is a proposed landing site by Optech and the Mars Institute, for a robotic mission to Phobos known as PRIME (Phobos Reconnaissance and International Mars Exploration).

The PRIME mission would be composed of an orbiter and lander, and each would carry four instruments designed to study various aspects of Phobos' geology. At present, PRIME has not been funded and does not have a projected launch date. Former astronaut Buzz Aldrin has spoken about the Phobos monolith and his support for a mission to Phobos.

The object appears in Mars Global Surveyor images SPS252603 and SPS255103, dated 1998. The object may be related to another monolith located on the surface of Mars, which NASA noted as an example of a common surface feature in that region. In fact, all three monoliths may be related structures left by an unknown civilization, for us Earthlings to discover and wonder about. Or perhaps they're just rocks.