In August 2020, Navalny was hospitalized in serious condition after he was poisoned with a nerve agent. 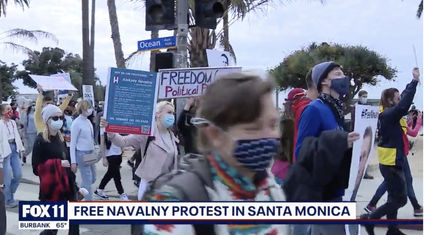 On Sunday, a crowd of about 30 demonstrators met at the Santa Monica Pier to protest the arrest of Alexei Navalny. He was sentenced today to two and a half years in Russian prison on a parole violation.

Alexei Navalny is a Russian opposition leader, politician, lawyer, and anti-corruption activist. He came to international prominence by organizing demonstrations and running for office to advocate reforms against corruption in Russia, president Vladimir Putin, and Putin's government. Navalny has been described as "the man Vladimir Putin fears most" by The Wall Street Journal.

In August 2020, Navalny was hospitalized in serious condition after he was poisoned with a nerve agent.

He was medically evacuated to Berlin and discharged a month later. Navalny accused Putin of being responsible for his poisoning and an investigation implicated agents from the Federal Security Service (FSB) in his poisoning. The EU and UK responded by imposing sanctions on Russian officials.

On January 17, 2021, Navalny returned to Russia, where he was immediately detained on accusations of violating parole conditions.

Following his arrest and the release of the documentary A Palace for Putin which accused Putin of corruption, mass protests across the country were held.

On February 2nd, Navalny's suspended sentence was replaced with a prison sentence, meaning he would spend two and half years in a penal colony. Navalny was already barred from running in any presidential elections until after 2028 as a result of his original conviction.

Navalny is the leader of the Russia of the Future party and the founder of the Anti-Corruption Foundation (FBK).

He has more than six million YouTube subscribers and more than two million Twitter followers. Through these channels, he publishes materials about corruption in Russia, organizes political demonstrations and promotes his campaigns.

In a 2011 radio interview, he described Russia's ruling party, United Russia, as a "party of crooks and thieves", which became a popular epithet.

In July 2013, Navalny received a suspended sentence for embezzlement. Despite this, he was able to run for mayor in the 2013 Moscow mayoral election and came in second, with 27% of the vote, losing to incumbent mayor Sergey Sobyanin, a Putin appointee.

In December 2014, Navalny received another suspended sentence for embezzlement. Both cases were widely considered to be politically motivated and intended to bar him from running in future elections. 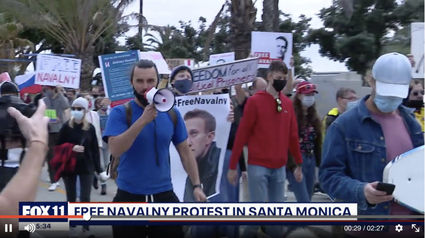 In December 2016, Navalny tried to run for President of Russia during the 2018 election but was barred by Russia's Central Electoral Commission and later the Supreme Court of Russia due to his prior criminal conviction.

Navalny and the FBK released the documentary He Is Not Dimon to You, accusing Dmitry Medvedev, the then prime minister and former president of Russia, of corruption, leading to mass protests across the country.