"Vendors With No Permits Are still cooking hotdogs with fire from butane tanks on the wooden Santa Monica Pier. You can see the flames..."

The Santa Monica Pier Is a Big Pile of 120 Year Old, Very Dry Wood. How Did It End Up Covered With Open Fires From Non-Permitted Food Vendors? 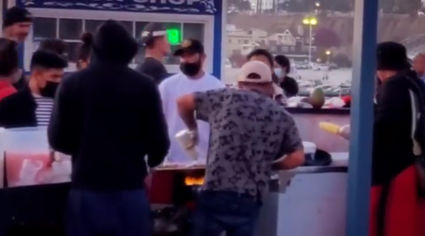 Note the open flames in the cooker of the illegal stand, right on the wooden pier.

May 5, 2021 After public outcry regarding illegal food vendors on the Santa Monica Pier, apparently run by the Murcia criminal family gang, authorities cracked down on the activity. The vendors had been involved in at least two violent incidents regarding territory and allegiance to the gang, including a brawl involving six arrests in early April. Police would now accompany Code Enforcement Officers onto the pier, according to a statement from Deputy City Manager Anuj Gupta on April 21. The city also pledged to enforce parking restrictions so that the large trucks hauling the vendor carts would not be able to park in the adjacent lots. Residents were urged to notify authorities if they saw street vendors without the required stickers, "Approved Sidewalk Food Vendor" and "Department of Health Services Food Service Cart." 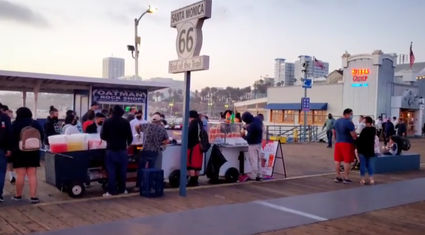 Illegal vendors are brazen as they serve food without health permits and without the expensive permits legal vendors must obtain.

But enforcement appears to have been either short-lived or perhaps restricted to the weekend. On Tuesday, a resident filmed the street vendors back on the pier, together with their open-fire, hazardous cookstands. "The unpermitted food vendors are still cooking hotdogs with fire from butane tanks over the wooden Santa Monica Pier," the resident wrote on social media. "You can see the flames in this video." As if this situation were not hazardous enough, the resident noted, "there are several full containers of butane under the carts as back-up. " The film was made at 7:45 pm on May 4.

UPDATE: It turns out enforcement dropped off because Santa Monica's acting City Attorney decided that, since the pier has a sprinkler system under its planks, it is okay to allow the risk of fire from the illegal vendor's illegal open-air cookstands. See our story at: https://www.smobserved.com/story/2021/05/07/politics/its-okay-for-the-santa-monica-pier-to-catch-on-fire-says-the-city-attorney-so-let-the-illegal-vendors-supplied-by-criminals-have-their-butane-fires-on-their-unpermitted-cookstands/5611.html