By Denise Delyle
Special to the Observer

Please keep your companion animals indoors at all times when you cannot be supervising! 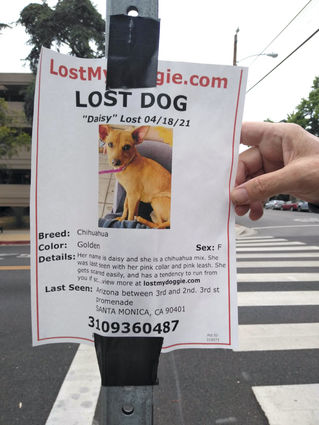 "Covid this, Covid that... It wouldn't kill you to refill the bird feeder Karen," gripes the chubby squirrel in a meme from last year. But seriously, urban wildlife depends on humans in ways we're often unaware of. Sometimes it's good to cater to these animals (example: planting milkweed along Monarch butterfly migration routes.) Other times, it's a little iffy, or there is room for debate (for instance, it's technically illegal to have a bird feeder in California since it's considered an interference with wild animals, although many birds have expressed the opinion that this is a stupid law.) And finally, there are those times when we humans really must take action to avoid certain relationships with wildlife -- for the safety of ourselves as well as wild and domestic animals. Here I am talking about coyotes.

Have you seen an uptick in the number of missing pet posters popping up around Santa Monica? There are of course many reasons this could be happening, and it's difficult to get data or link a correlation to a cause, but when your beloved Jose the Chihuahua or Margot the ginger kitty is on the line, you don't want to wait for the theoretical research results. You want to do everything you can to keep them safe. Because most missing pets never come back. And yes, even in a bustling big city like LA, coyotes roam the streets from dusk to dawn. And yes, a coyote will eat Jose or Margot if he/she is outdoors and unattended.

Every week of 2005, Animal Urgent Care of South Orange County had 3-5 pets brought in after coyote encounters. Most were dogs, since cats attacked by coyotes usually died right away. Even larger dogs aren't exempt, although the wily coyotes tend to be wise/cowardly enough to target animals significantly smaller than them -- small-breed dogs and all cats. Scat analysis in Claremont from decades before showed that local coyotes relied on companion animals as their primary food source in winter and spring. In at least one case reported by the Orange County register, a coyote grabbed a woman's chihuahua while the latter was on leash.

The trend is for coyotes to become less afraid of humans, as some well-intentioned people leave food out for them. A healthy fear of humans is actually a life-saver for many wild animals as human cities continue to encroach on their habitat -- if we're going to be neighbors, it's important to build good fences (literally and figuratively.) After all, not all humans are friendly, and teaching an animal population that it's safe to engage with humans sets them up to be victims of accidental or deliberate harm. For example, when some humans give coyotes handouts, those animals can become more aggressive even towards other individuals who have never been a source of handouts -- joggers have been harangued and bitten on hiking trails.

When the general public begins to see the species as a threat, people may begin deliberately shooting or poisoning the animals. Since human children have been occasional victims of coyote predation, law enforcement may condone or get involved in programs that "protect children" by harming coyotes -- and all the while, we humans have been inculcating into these wild canines the behaviors that will be their downfall.

Perhaps the most disturbing story is from a southern Californian feral cat colony in the late 1990s. A feral cat is one that was generally born on the street and will never be able to be "tamed" or to live in a human home. "Neighborhood" or "stray" cats can also be part of these "colonies," which are groups of cats that hang out in a designated area where they either know they can catch food, or there are humans who bring them food out of the goodness of their hearts (or both.)

This colony was fed by local residents, who lovingly laid out cat food every day for cats that they would never get to pet. But the local coyotes were drawn like a fox to a henhouse. Over time, the size of the cat colony shrunk until there were only a few cats left. Once the canines had guzzled all the felines, they began to eat the cat food that people still left out each day. Was this now a feral coyote colony? Or a colony of "neighborhood" or "stray" coyotes? Are we once again domesticating a new species of canine? What will our cats think when their homes are invaded by even more drooling retrievers -- ones without years of behavioral selection teaching them to "drop it" when their beloved human catches them carrying kitty in their well-endowed jowls? 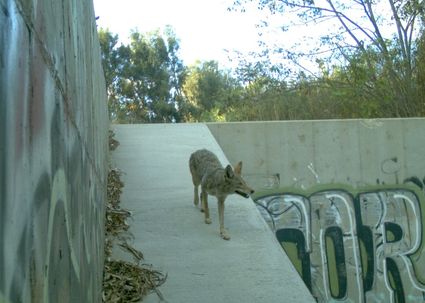 Coyote at a wildlife crossing near Thousand Oaks.

Ok, maybe I'm catastrophizing here. For now, let's just focus on step one: making sure we don't lose any more of our beloved Joses or Margots, and our local Canis latrans don't learn that there's a possible reward to be gained by approaching children. Please, please please please, keep your companion animals indoors at all times when you cannot be supervising! Only let your dogs out while on a leash that is attached to your attentive hand. And never let your cats outside at all. I know it's hard, but those scratches on the door varnish are a small price to pay for another decade or so with Margot in your lap. And if she just loves the great outdoors, you can harness-train her, or build a sturdy catio that doesn't allow anything larger than a flea to get in or out. In the end, everyone loses when we put our pets in an unsafe situation. Everyone wins when we take responsibility for our actions and our urban wildlife.