Gelsons Will Make Everything All Better, says Hines Development Regarding Mega-Sized West Edge Project Under Construction On Olympic Near Bundy

A high-end grocery store should ease the pain of supplying traffic time and air space to an 8-story, 200,000 sf development

There will be a Gelsons at the eventual megalith development that is replacing Martin's Cadillac on Olympic Boulevard near Bundy. Hines development company, who is constructing the eight-story mixed-use project, thinks that learning this exciting news will make up for the increase in traffic that 200,000 square feet of offices and 600 apartments will bring to an already crowded area.

"Securing a retail anchor of Gelson's caliber is a true testament to our place-making plan," reads a press release from Hines. The "place" Hines is constructing is a blocky pack-and-stack that looks identical to every other mid-rise mixed-use development springing up like a disease throughout Los Angeles. A combination of white stucco and miles of glass with the obligatory (and approval-contingent) plaza elbowing itself a little space between two heavy-set buildings.

But don't let an architect's artistic rendition of the future buildings fool you. No, this is actually "an iconic project;" it is "the preeminent live, work, play development" that is "dynamic" and exemplifies a "coastal California lifestyle." It is a "highly visible landmark." That last is code for being big, which it is.

But by far the most cynical and insulting line in the press release is that the West Edge 200,000-square-foot development will "contribute to the vibrant local community and help transform the surrounding West LA neighborhood." That neighborhood hadn't wanted to be transformed. In fact, they formed into the "Westsiders Opposed to Overdevelopment" and sued the City of Los Angeles for granting approval to the mega-development. When they lost, they took their case to California's Second District Court of Appeal. They lost again, but I doubt that means they have warmed up to the development, which was allowed to go forward. Certainly, they are not looking forward to having their neighborhood "transformed" into denser traffic, less parking, and more crowds and noise.

Residents in Santa Monica were more fortunate in their fight against a similar mega-development planned by Hines at the former Papermate factory, also on Olympic Boulevard. In this case in 2014, opponents to the project had a weapon in the form of a referendum petition. If enough residents signed a petition against the project, the city council would not be able to vote for its approval. Instead, the project would have to be put on a ballot for a city-wide vote. The residents gathered twice the required number of signatures, and the city council decided to abandon the idea rather than go through the possible humiliation of getting voted down by their own residents.

Fancy retail outlets with high prices only add insult to injury when large projects designed to profit the few destroy neighborhoods and drastically reduce the quality of life for people who can't afford the high-end stores. 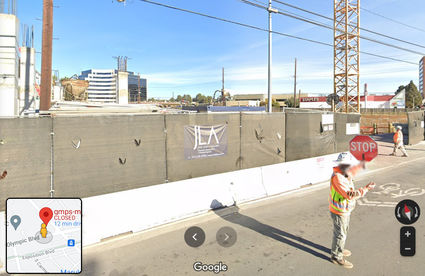 Ground broke in January, 2020, for the West Edge project, which is not expected to open until 2022

If Gelsons succeeds at this location, it will be via patronage by people driving in with fancy cars, not from neighbors walking to their local market.