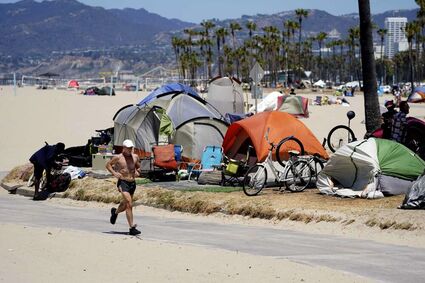 A jogger passes a homeless encampment on Venice Beach, 6/8/21.

A petition for the recall of the controversial, Los Angeles Councilman Mike Bonin was approved for circulation, the City Clerk announced this week.

Bonin, who represents many Westside neighborhoods, including Venice, was served with a recall notice on June 15. Petitioners against Bonin cited his failed attempt to handle the Westside's homelessness crisis and his continued "failure to follow through on promises he made to his constituents."

According to Recall Bonin 2021, the group behind the recall bid, Bonin has failed to curb the homeless situation in the district, allowed trash in the district to buildup, "worsened public safety and has detrimentally made the quality of living worse in his tenure."

In recent months, Bonin faced strong criticism after introducing a motion to explore the possibility of establishing temporary homeless shelters on beach parking lots, including Will Rogers State Beach in Pacific Palisades. More than 31,000 opponents of the motion signed a change.org petition against creating camping sites and tiny home sites in Westside beaches and parks.

"This recall campaign is an extravagant waste of taxpayer money, a thinly disguised attempt to derail my efforts to provide real solutions to our homelessness crisis, and the latest in a series of recall attempts to silence strong progressive voices," Bonin said after he was served by the notice in June. "This recall has been championed by the same right-wing forces that are trying to erode our democratic process and take down progressive officials across the state."

In addition to the upcoming recall election for California Governor Gavin Newsom, Westside residents will also have a say on the recall effort against LA County District Attorney George Gascón.

Under Los Angeles' recall rules, petitioners against Bonin now have 4 months to collect 27,387 signatures from voters in his district to spur a recall election sometime in 2022.

If sufficient signatures are obtained and verified, a presentation to recall will be made to the City Council at some point in December. Council would then have 14 days to call for an election.

This is not the first time Bonin–who has served on the LA Council 2013 –has faced a recall effort. In 2017, critics of his "road diets" – which eliminated traffic lanes in an effort to reduce pedestrian and cycling injuries -- launched an unsuccessful campaign to remove Bonin from office after his program resulted in congestion in many streets.