Model Who Lived Quietly at 6th and California for 25 years, Could Be Seen Pushing Her Grocery Basket All Over Santa Monica

Rachel Newton Broome passes away, Age 89. She once worked for a local church and the SMMUSD. 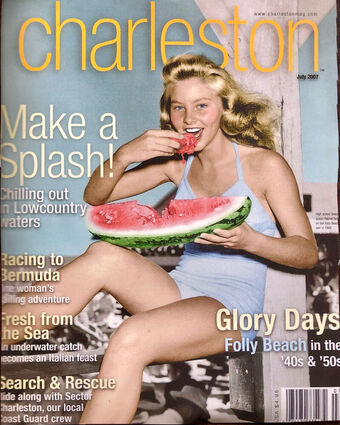 Rachel Newton Broome passed away peacefully with her children by her side on July 5, 2021 in Santa Monica. She was 89 years old

Born in Denmark, South Carolina in 1931, Rachel grew up in Charleston, and graduated from Memminger High School in 1949. As a teenager, Rachel won numerous local beauty pageants and was featured in magazines and brochures promoting the area. A photo of Rachel on the Folly Beach Pier in 1946 was featured on the cover of Charleston Magazine's July 2007 edition.

Rachel married Richard Broome in 1953, and together they had five children. They eventually settled in California where they lived for over 50 years. Rachel enjoyed playing tennis, bridge, and spending time with family and friends. While she adapted well to the Southern California lifestyle, her heart never left Charleston, and she spoke fondly of the area often, recalling King Street as her favorite place to walk in the city.

Rachel is survived by four children and two grandchildren.

Contributions in her memory can be made to the American Diabetes Association http://www.diabetes.org 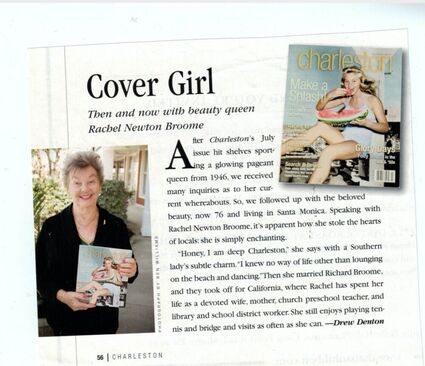 Excerpt from "Then and Now With Beauty Queen Rachel Broome," Charleston Magazine July 2008:

"After Charleston's July issue hit the shelves sporting a glowing pageant queen from 1946, we received numerous inquiries as to her current whereabouts. So we followed the beauty, now 76 and living in Santa Monica. Speaking with Rachel Newton Broome, it's apparent how she stole the hearts of locals: She is simply enchanting."

"Honey, I am deep Charleston," she says with a Southern lady's subtle charm. "I knew no way of life other than lounging on the beach and dancing.:" Then she married Richard Broome, and they took off for California, where Rachel has spent her life as a devoted wife, mother, church preschool teacher, and library and school district worker. She still enjoys planning tennis and bridge, and visits as often as she can.--Drew Denton"