Death toll will probably rise above 100, as rescuers comb through debris in six State area. 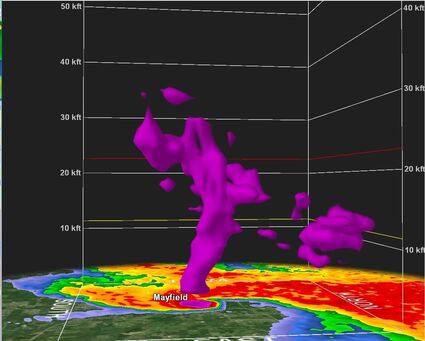 This rendering from radar shows a tower of tornado debris 30,000 feet into the air.

As the scale of destruction from this weekend's tornado event in Southwestern Kentucky becomes clear, the number of deaths could rise past the United States modern record of 330 deaths set in 1972.

A path of tornadoes 200 miles wide may also break a record. About 417 "severe storm reports" were received by the National Weather Service, a record for one event. Arkansas, Illinois, Kentucky, Missouri and Tennessee were all impacted by the disaster.

The 219-mile-long Tri-state Tornado of March 1925 is considered the deadliest and longest tornado path in US history. It killed 695 people as it passed through Missouri, Illinois and Indiana during the overnight hours. Some 10 tornadoes in Bangladesh have killed over 1000 people.

From Wikipedia: "A rare, late-season tornado outbreak affected portions of the Southern and Midwestern United States from the evening of December 10 to the early morning of December 11, 2021. The event came to fruition as a trough progressed eastward across the United States, interacting with an unseasonably moist and unstable environment across the Mississippi Valley. Tornado activity began in northeastern Arkansas, before progressing into Missouri, Illinois, Tennessee, and Kentucky.

"The most prolific activity was caused by a long-track supercell thunderstorm that produced a family of strong tornadoes, if not a single long-track tornado, across four states. The tornadoes first touched down in northeastern Arkansas, and tracked through the Missouri Bootheel, ripping through towns such as Monette and Leachville, Arkansas, and Hayti and Caruthersville, Missouri; after crossing the Mississippi River into portions of West Tennessee, the storm eventually tore through western Kentucky, where the town of Mayfield suffered catastrophic damage.

"Preliminary estimates suggest the tornado family-identified by some media outlets as the "Quad-State tornado," due to the storm's similar characteristics to the 1925 Tri-State tornado-may have cut a path of up to 250 miles across the affected areas; if confirmed to be a single tornado, it would surpass the March 18, 1925 tornado event (which carved a 219-mile path across Missouri, Illinois and Indiana) in terms of path length.

Other tornadic thunderstorms affected portions of eastern Missouri, southern Illinois, western and middle Tennessee, and western and central Kentucky during the late evening into the overnight hours of December 11, including two intense tornadoes that hit Bowling Green, Kentucky and Defiance, Missouri.

"At least 34 people have been confirmed to have been killed by the tornadoes. Unconfirmed estimates suggest that the tornado outbreak may have caused between 75 and 100 deaths across the four states, with 50 to 70 residents feared dead in Mayfield, Kentucky. If confirmed, it would be the deadliest tornado event in Kentucky state history, surpassing the Louisville-area tornado of March 27, 1890, which caused at least 76 fatalities."