Report: 30 Russian Helicopters Destroyed on the Ground at Kherson Airport by Ukraine Marines

Local residents see explosions at an airport held for 5 days by the Russians, on Monday morning March 7 2022 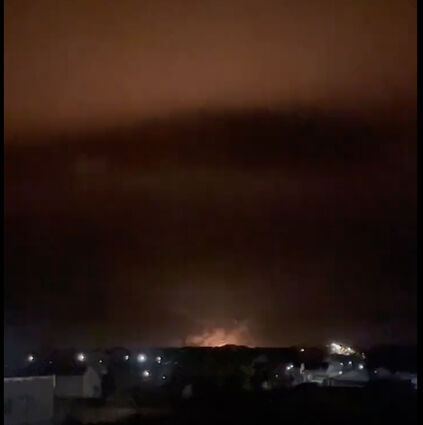 Screenshot from video of the incident, showing explosions at the Kherson airport early Monday morning.

"Ukraine's Marines: Thirty enemy aircraft destroyed on the ground at the Kherson Airfield." This tweet from Illia Ponomarenko, Kyiv's Independent's war reporter in Southern Ukraine. If confirmed, this would be a major victory for the Ukrainian Armed Forces.

There is another tweet from "Euromaidan", which says all 30 aircraft were helicopters, and identifying the name of the airfield as Chernobayivka.

The tweet containing the video, by a Kherson resident, says that the Kherson airport has been held for five days by Russia. Residents observed the explosions in the video above, early Monday morning 3/7/2022. 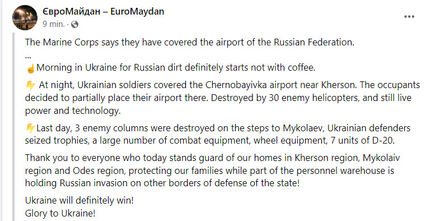 On Twitter the validity of the claim was discussed. "Usually when these guys claim something it turns out to be true so and if it's not they let us know. So I have no doubts it is true.. What is the difference between 30 armored vehicles and 30 planes on ground? It's the same stuff once you hold RPG."

"While this seems absurd ... it isn't. The Ukrainians have taken to going on the offensive lately and taking advantage of Russian operational chaos. It happened in Hostomel and Kharkiv as well. The Ukrainian army is not a rag tag outfit. They are pros. Trained by U.S. SpecOps," tweeted Frankie Brenn.

Yesterday, Ukraine Army claimed to have killed more than 11 thousand soldiers since Feb. 24. They also claimed to have destroyed 296 Russian tanks and 68 Russian helicopters. There is no way to independently confirm these figures.