NASA's Mastcam captures an image of what looks very much like a doorway on Mars. 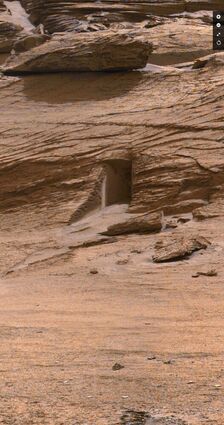 Color image: NASA's Mastcam captures what looks like a doorway on Mars.

The Mastcam on the Mars Curiousity Rover has beamed back a photo of what looks very much like a door carved into the Martian hills. Needless to say, Social Media had a field day with it.

"The human brain has a pattern recognition function. In brief.. it’s not a door," tweeted Gordon Newell.

"That’s what the lizardmen at NASA and the UN who claim the Nazis never made it to Mars want you to think" replied Arthur Scott. 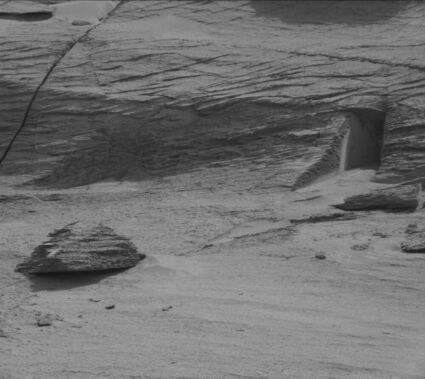 NASA's Mastcam captures what looks like a doorway on Mars.

"I wouldnt say that's fair to simply assume. These are mere excited comments on images shown to us, in a way, imagining that some being had reason to build a door excites the human mind but does not do much harm. Neurology is boring," tweeted Genie Wonderbread.

The Mast Camera, or Mastcam for short, takes color images and color video footage of the Martian terrain. The images can be stitched together to create panoramas of the landscape around Mars Curiosity rover, writes NASA. https://mars.nasa.gov/msl/spacecraft/instruments/mastcam/

Curiosity is a car-sized Mars rover designed to explore the Gale crater on Mars as part of NASA's Mars Science Laboratory mission. Curiosity was launched from Cape Canaveral on 26 November 2011, at 15:02:00 UTC and landed on Aeolis Palus inside Gale crater on Mars on 6 August 2012, 05:17:57 UTC. Wikipedia