Presiding over a massive increase in crime of all sorts, which many attribute to his radical "reforms," the social-justice district attorney seeks to school us in crime prevention

Smash and grab robberies and simple shoplifting are rampant in the region, thanks to DA George Gascon

May 18, 2022 - At a press conference today, Los Angeles District Attorney George Gascon, who has presided over one of the highest increases in crime in the region, sought to educate the public regarding reducing gun violence.

According the Association of Deputy District Attorneys, which has sued Gascon for violating state law, there were 859 people killed in the county during 2021. 687 of these deaths were the result of gun violence.

Gascon began his tenure as district attorney by forbidding his staff from filing gun enhancements on underlying crimes. So if someone held up a convenience store with a gun, which would normally involve additional prison time for the gun use, Gascon would force his deputy district attorneys to forego asking for that additional time.

Ironically, Gascon claimed "we are in this position today [mass shootings that occurred over the weekend] because we have leaders in our country who are willing to disregard public safety." He did not appear to mean himself. Even though, in addition to forbidding gun and other enhancements, Gascon immediately instituted a no-cash-bail system, also in violation of state law. Instead of blaming this obviously dangerous policy for the increase in crime, Gascon pointed to leaders who allow others to "sell assault rifles to 18-year-olds and spread racist hate if it helps win elections."

But if Gascon feared 18-year-olds with assault rifles, why doesn't he lock them up when they commit crimes? Instead, "In Los Angeles, a suspect caught with an assault rifle will be released back on the streets before the arrest report is finished," wrote ADDA Vice President Eric Siddall in a statement regarding Gascon's presser. "Because of Gascón's bail policy, recidivist career criminals caught with guns face a revolving courthouse door. They continue to victimize our residents. No wonder gang members toast Gascón from prison and want to tattoo his name on their forehead," Siddall added.

Siddall said that California's gun laws are "the strictest in the nation. Yet, for some inexplicable reason, Gascon refuses to enforce them."

Instead of locking up the criminals who have chosen to commit crimes, Gascon pointed to his achievements, none of which are achievements but which are rather policies for which he has zero evidence of success: 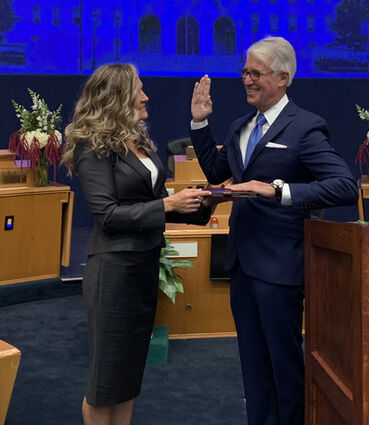 From the moment District Attorney George Gascon, who resigned his position as district attorney of San Francisco, was inducted, the county has been on a downward spiral regarding crime and vagrant drug use

Fund programs to stop violence (no evidence of reduction in crime)

Include health practitioners and violence interrupters in crime prevention work (no evidence in reduction in crime or violence, and damn lucky if none of these unarmed professionals have yet been killed)

Gascon seemed particularly eager to announce that he has a Mass Victimization Crisis Response Team which is specailly trained to help the victims of mass shootings, together with their families and communities.

That's good. Because there will be more mass shootings. Everything Gascon does appears calculated to ensure it.